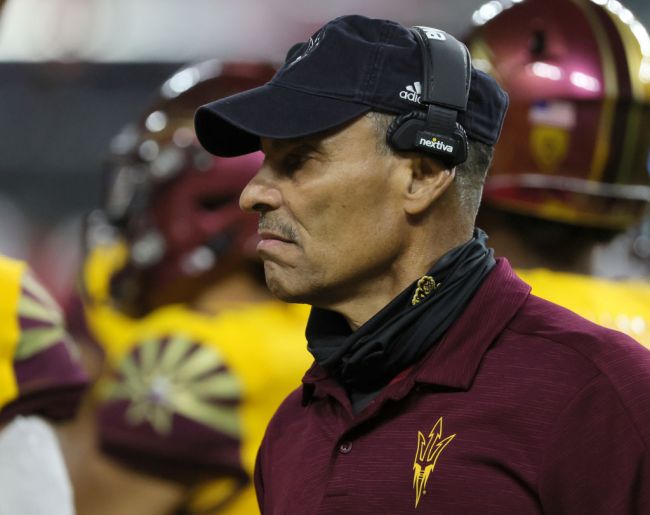 The Arizona State football program is in a terrible spot right now. They just lost their starting quarterback after he made it seem like he’d be returning for another season. They had the worst recruiting class in the PAC-12 this year. They’ve lost their offensive coordinator and other coaches because of an NCAA investigation.

“Sun Devil Source” reported today that their sources are telling them about an extensive number of violations by the program. Some of those violations directly involved Herm Edwards.

The report says that despite what ASU president Michael Crow may have had to say about the investigation today, Edwards met with recruits both on and off campus during a 14 month period where recruiting was not permitted.

Edwards personally met with one of ASU’s top offensive targets in the 2021 class, a member of 247Sports’ Top247, at a rented home in Paradise Valley in July of 2020 who had his travel to Phoenix paid for by an ASU staff member, which is a considered a significant rules violation that NCAA investigators are aware of, two people said. Edwards also met with another top offensive target of the Sun Devils at the home on the same weekend for recruiting purposes.

The report does state that they are unsure if Edwards was aware of recruit having his travel paid for. However, the numerous violations being reported still paint a bleak picture of how this investigation will turn out for Arizona State.

If these reported violations turn out to be true, this investigation will likely lead to hefty penalties and possibly the end of Edwards’ tenure at Arizona State.

It sounds like Herm Edwards played to win the game and it could be costly for him and Arizona State’s football program.