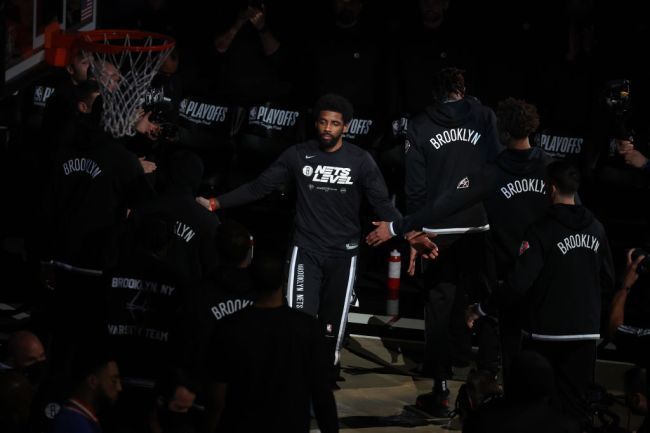 Over the past few weeks, the basketball world has seemingly reached the conclusion that Kyrie Irving has his heart set on playing for the Los Angeles Lakers next season and that the Lakers share that interest. However, it seems that may not actually be the case.

According to a New York Post report from yesterday, Kyrie actually has a different team in mind for next season. A source close to the team reportedly told Brian Lewis that Kyrie actually wants to stay with the Nets.

Kyrie Irving wants to be a Net — with or without Kevin Durant https://t.co/anMtVbSBBQ pic.twitter.com/9gB8qHLxji

How did we get into this situation about trade, when he opted in? Here is the situation. He opted in, which means he had and he has every intention of playing with the Brooklyn Nets. KD decides he wants out and now everybody is talking about trading Kyrie, right?

Kyrie has not asked for a trade. Now, if the Nets don’t want him, that’s something totally different. Kyrie has not said he wants a trade. He opted in. [So where did] the trade conversations come from? Is it because, KD requested a trade and now everybody’s like let’s trade Ky? Kyrie opted in.

If Kyrie really has decided that Brooklyn is where he wants to be then the Lakers are going to have a really tough time trading their own starting point guard and finding a star who fits better alongside Anthony Davis and LeBron James.

This report makes the idea of the Nets holding on to KD and Kyrie for another season a much more realistic possibility. There have been recent reports that this is the outcome the Nets have actually been hoping for despite the KD trade request and the team’s struggles to reach a long-term deal with Kyrie.

After all of the drama that has surrounded the Brooklyn Nets this offseason, it looks like there’s still a chance they could head into next season with their stars still on the roster.