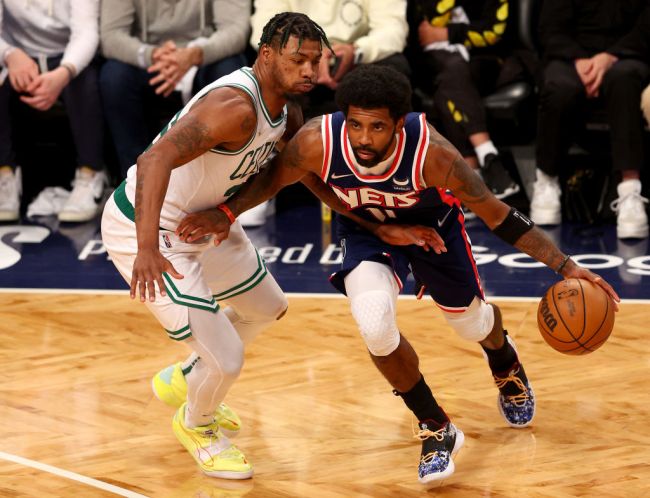 After weeks of basketball fans wondering what the future holds for Kyrie Irving, it has seemingly become a certainty that Kyrie will end up with the Los Angeles Lakers this offseason.

He hasn’t gotten much interest from any other teams and reportedly wants to join the Lakers for a reunion with LeBron James. However, the Nets and Lakers haven’t been able to agree on a deal to send Kyrie to LA yet.

It had been believed that the main issue preventing a deal was that the Brooklyn Nets wouldn’t swap Kyrie for Russell Westbrook without receiving a 1st round pick in the trade.

According to a new report from Hoops Hype, that actually isn’t the problem. Now it seems the Nets want 2 1st round picks in the deal, so they can entice a 3rd team to take on Westbrook in exchange for the 2nd pick. Meanwhile, the Lakers aren’t interested in trading both their 2027 and 2029 1st round picks to offload Westbrook.

Story: The latest updates on Kevin Durant trade talks with the Raptors, Warriors, Pelicans, Suns and Heat. Plus, more on where the Lakers stand with Kyrie Irving and what’s next for Deandre Ayton in free agency on @hoopshype. https://t.co/oh0UCEmBkB

This just seems like some terrible negotiating from the Nets. 2 1st round picks is simply too high of a price to get this deal done and the Nets don’t really have any leverage in this negotiation.

Nobody but the Lakers wants Kyrie Irving right now, so if the Nets can’t agree to a deal with them, they’re just going to be stuck with Kyrie until his contract expires next summer.

With no real chance at contending once they trade Kevin Durant, the Nets should just take the 1st round pick they can get from the Lakers, eat the extra $10 million they’ll have to pay Westbrook, and hope they can ship him out around the trade deadline to land another pick as they begin their rebuild.

It’s not like the Brooklyn Nets exactly have better offers pouring in for Kyrie.