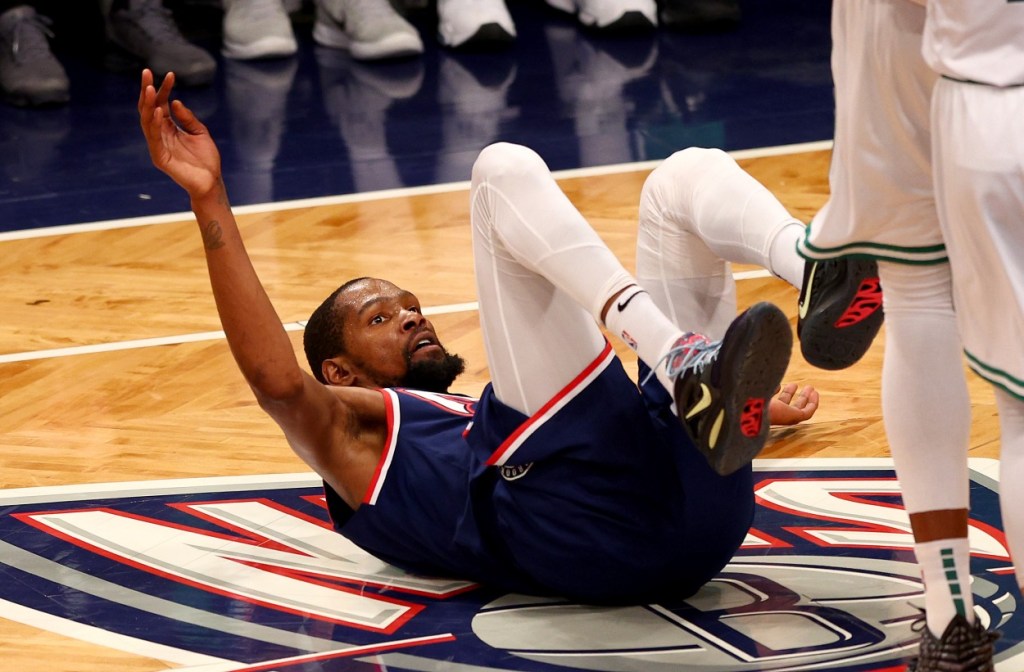 Kevin Durant has made it clear he wants to be traded from the Brooklyn Nets. This is despite there being 4 years, $198 million left on his contract.

Durant has been playing on ‘big market’ teams since he left the Oklahoma City Thunder after the 2015-16 season went went to the Bay Area and then NYC. So throughout the trade chatter, it has seemed as if Durant would likely wind up in another ‘big market’. But that might not be the best fit for all the parties involved.

A Monday morning report from Shams Charania revealed a new Western Conference suitor for Kevin Durant. He notes that ‘designated rookie extension rules’ have been the ‘major complication to involving logical players in trade talks for Durant like Adebayo and Utah’s Donovan Mitchell.’ And that’s where the Memphis Grizzlies enter the picture…

“Recently, a new team has shown interest in Durant: the Memphis Grizzlies, league sources tell The Athletic. Fresh off a 56-win season, the Grizzlies have made new inquiries to the Nets about Durant, those sources added. Memphis has five first-round draft picks available (four unprotected selections of its own and one protected via Golden State in 2024) to utilize in a trade as well as young players like Jaren Jackson Jr., Desmond Bane, Ziaire Williams, Brandon Clarke, Kennedy Chandler and David Roddy.”

“Moments after The Athletic reported that Durant had requested a trade back in June, a tweet from Grizzlies star Ja Morant caught a lot of attention for its obvious pro-Durant sentiment.”

According to Shams’ report on the Kevin Durant-Memphis Grizzlies situation, Memphis has not Jackson or Bane in trade offers. But what they have is a ‘bevy of draft picks’ according to Charania.

As of August 8, the most likely landing spot for Kevin Durant was the Boston Celtics (-175 odds) followed by the Phonix Suns at +350. The Grizzlies were +1200 to land Durant just a few weeks ago but those odds are certainly shifting.

Here’s how the NBA world reacted to this news from Shams Charania.

KD to Minnesota for a 2nd round pick

This is definitely the most likely outcome at this point:

Knicks fans seems resigned to be out of the running:

Nah it’s more of the jazz asking for the Statue of Liberty,Madison Square garden, and 5% stake for the Yankees when wanting to trade Mitchell to the Knicks

Dallas has never been in the discussion. If Mark Cuban wanted to trade for Kevin Durant I’m sure we would’ve heard about it by now.

I know it’s far fetched but Luka and KD is a guaranteed chip. You can surround them with JV players they’ll still win

We all know @mcuban pic.twitter.com/lni5UnpqTI

Fans are tired of nothing but reports and rumors:

This lineup would be incredible but they’d be an injury away from being worse than last season. And when is the last time an NBA team went a full season with all their stars staying healthy?

The Memphis Grizzlies. Ja, Jaren, KD and the gang = championship.

Kevin Durant to Memphis makes sense for a lot of reasons. But it’s hard to imagine KD would move to the Grizzlies and not feel like the star/leader of the time and it’s Ja Morant’s team. So there would almost immediately be a strange power dynamic there.