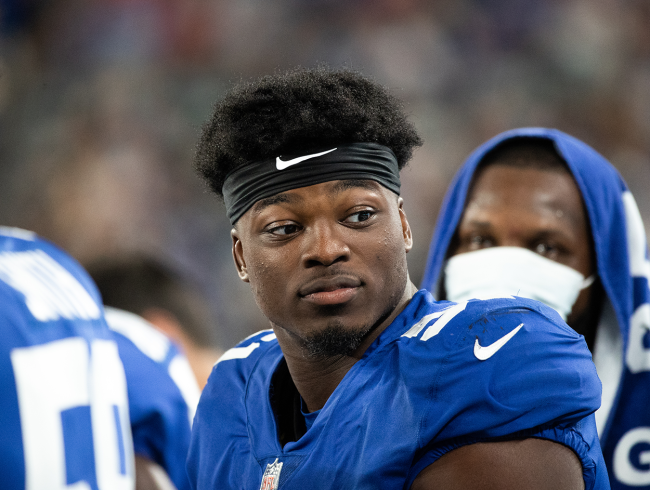 New York Giants linebacker Azeez Ojulari showed signs of greatness in his first season in the NFL last fall. The Georgia-native became the first player in franchise history to record a sack in his first three games and went on to set the team’s rookie sack record.

Ojulari was drafted with the No. 50 overall pick in the second round of last year’s NFL Draft. He was a four-star recruit out of high school and went on to play his college ball at Georgia, where he was named second-team All-SEC and was the defensive MVP of the Peach Bowl as a senior.

Because of his dominant college career and impressive rookie year, Ojulari comes with a lot of hope and expectations to be a big part of the Giants’ success on defense. He is only 21 years old but he has a lot of weight on his shoulders— literally.

Despite playing the outside linebacker position, which is not typically occupied by big-bodied bruisers, he is massive. Ojulari was listed at 6-foot-3, 240 pounds in 2021 and might weigh-in heavier than that this fall, because muscle weighs more than fat.

He recently sat next to his friend Andrew Thomas, who stands 6-foot-5, 315 pounds and plays tackle for New York. Ojulari (left) looked just as big, if not bigger.

Not only is Ojulari absolutely jacked, but he wears the weight well. He is long (particularly in his wingspan) and lean.

Ojulari appears to be poised for a breakout year. He burst onto the scene in 2021 and appears to have spent every single waking moment of the offseason in the weight room or hyperbolic chamber getting absolutely shredded. His speed with that size is a dangerous, terrifying combination.

And his friendship with Thomas is pretty hilarious.

Andrew Thomas and Azeez Ojulari are a whole vibe 😂😂 pic.twitter.com/t0mShVax8d