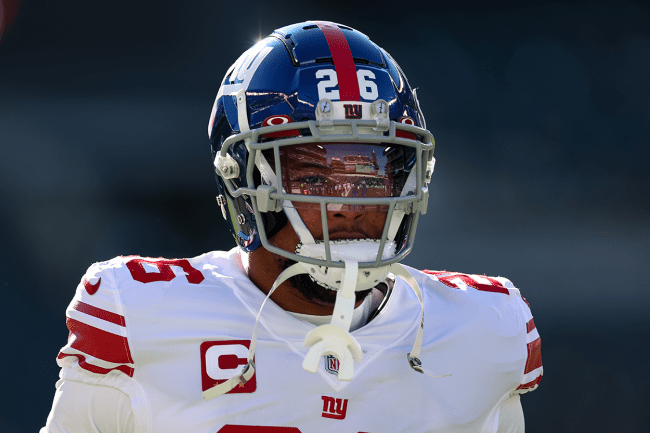 Saquon Barkley has struggled to stay healthy during his first three years in the NFL, but he is back at full strength in 2022. The former No. 2 overall NFL Draft pick is set to play a huge role in the offense.

New York has not had a winning season since 2016. The Giants have been objectively terrible in recent years.

However, after hiring Brian Daboll from Buffalo as their new head coach, there is a renewed buzz around the team. There is hope in the Big Apple.

As the Giants try to distance themselves from the Joe Judge era, something that has been hard to do, it is going to have a completely overhauled offense this fall. Daboll is an offensive guy himself and has big plans for how to shake things up and get his playmakers the ball.

Saquon Barkley is a large part of Brian Daboll’s vision for the New York offense in 2022.

First and foremost, Barkley said that he can “trust his knee again” which has led to the return of his “swagger.” That’s a big statement, because when he is healthy, he is a real problem for opposing defenses.

From there, Barkley went on to say that he has not been used in an offense as much as he has in the last few months since college. He is being lined up all over the field— in the backfield, in the slot, and even split out wide.

“I think it’s helpful, not only for myself, but opening up other things for the offense,” Barkley said. “I haven’t really moved (around) like this since college. I kind of went back and watched a little bit of my college stuff to see stuff that I was able to do there.”

Barkley was a monster in college. If Daboll can find a way to use him similarly, it could change everything about the Giants. They struggled greatly under Judge’s watch last year. It would appear as though that might change this fall.