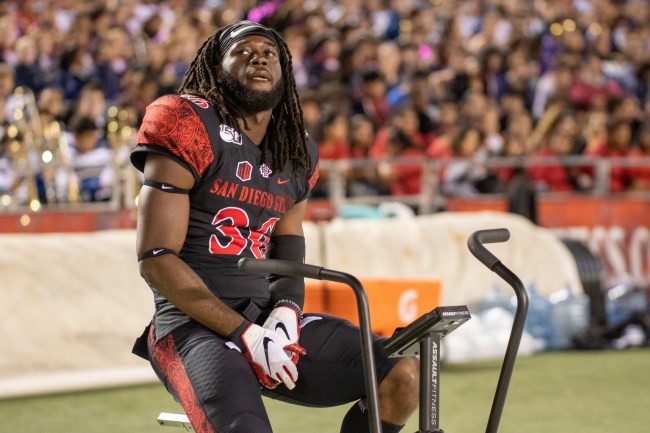 Every once in a while, we get a fun coincidence with names in the NFL. There has been some Josh Allen on Josh Allen crime this year. The New York Jets drafted a pair of Michael Carter. Now the New York Giants have signed a Dwayne Johnson.

No, Dwayne Johnson Jr is not related to The Rock in any way, but that hasn’t stopped fans from making jokes on Twitter.

Not even the rock can save this team

The Giants signed Dwayne Johnson Jr., a DB from San Diego State, to their practice squad, per the transaction wire pic.twitter.com/QOduif12cX

Finally, the Giants HAVE MADE A ROSTER MOVE THEIR FANS CAN BE HAPPY ABOUT https://t.co/96OET0DjLC pic.twitter.com/rmDQMtlEb4

Great now the @TheRock is suiting up on Sunday vs the #Eagles https://t.co/7KIETEbOa4

Dwayne Johnson is a rookie safety who previously spent 4 years at San Diego State. The Giants signed him to their practice squad.

Johnson went undrafted back in April, but was later signed to the Atlanta Falcons’ practice squad.

That puts this Dwayne Johnson one step ahead of his more famous counterpart. The Rock played defensive tackle at the University of Miami, but was never able to make the jump to the NFL. Instead, he went to the Canadian Football League, but only lasted 2 months there.

While this signing won’t end up making a real impact for the New York Giants, it is nice to see them making headlines for a reason that isn’t negative for once.