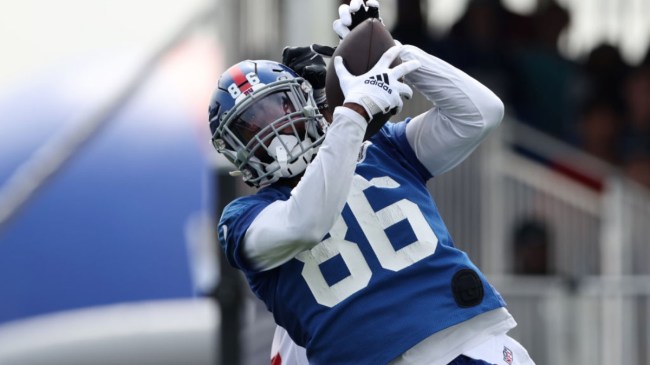 With a new regime taking over in the front office and in the coaching staff, the New York Giants were the subject of many trade rumors throughout the offseason. While the rumors about James Bradberry ended in his release and the Saquon Barkley rumors have subsided, reports about Darius Slayton have persisted through the offseason.

Today, Slayton addressed the rumors about the Giants seeking a trade for him.

Darius Slayton with a sense of humor on Giants taking calls on him:

"Their job is to do what’s best for this team. So if somebody calls them and like if the Rams called and were like we’ll give you Aaron Donald for Darius Slayton, I mean I’d make that trade, too."

Slayton did follow the joke up with a more serious answer about his situation.

Brian Daboll & staff had individual meetings with offensive players still on roster today. Slayton said the trade rumors came up, obviously, because it's public. But "I don’t take that personal[ly], no … They field the calls cuz that’s their job."

He also revealed that he doesn’t believe the Giants are actively trying to trade him.

Asked Slayton if he got any clarity on whether Giants floated calls because they're trying to move him:

“Not really. If I had to guess, I would guess that wasn’t the case, though, you know?”

For now, he said: "I'm here today! Time will tell."#Giants

Slayton was a 5th round pick for the Giants in 2019 who quickly proved to be a steal for them. As a rookie, he posted 740 yards and 8 touchdowns and followed that up with 751 yards in his second year.

However, over the past couple of offseasons, the Giants have made major investments at the position. With Kenny Golladay, Ladarius Toney, and Wan’Dale Robinson all joining the roster, wide receiver has become a very crowded position for the Giants.

Slayton made it through the team’s cut down to 53 players today, but trade could still very much be a possibility for him some time before the trade deadline.