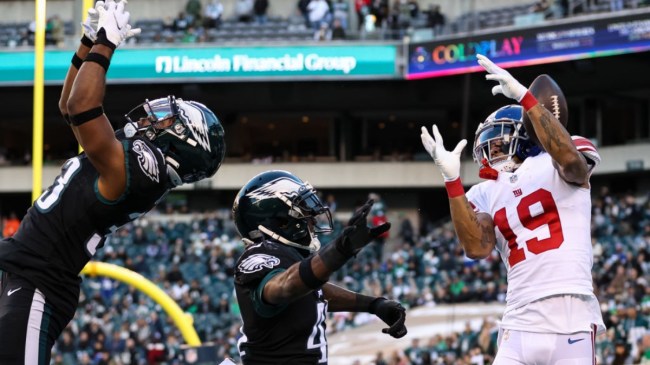 The New York Giants have made some mistakes in recent seasons. Bad draft picks, bad coaches, and even bad contracts. While in the past, it has been difficult to truly nail down what the was the worst move the Giants made under Dave Gettleman, the answer to that question has been becoming more clear.

Last offseason, the Giants decided to give Kenny Golladay a 4 year, $72 million contract in free agency.

That move has proven to be a disaster for the Giants. During his first year with the organization, Golladay only managed 37 catches for 521 yards and didn’t score a touchdown. The Giants had 11 different players catch touchdowns in 2021, but their big free agent acquisition wasn’t one of them.

There have been no indications throughout this offseason that Giants fans should be hopeful that there will be improvement in year 2.

What’s going on with Kenny Golladay and Kadarius Toney? Can either be trusted?#giants #FantasyFootball #nfl https://t.co/6lck125E3h pic.twitter.com/r7TsaEiSZz

He has been running routes this summer with the stiffness of a mannequin and was curiously on the field playing with the backups in New York’s final preseason tune-up this past Sunday. Much like his first season with the Giants, it was strange and eye-opening.

Route running was never exactly what teams were interested in from Golladay. Instead, it was his size and athleticism that were truly appealing to scouts. However, he has managed to underperform even the low expectations for his route running since joining the Giants.

Fans of the Giants have to just be waiting for the day the team can move on from this contract and spend the money on somebody who will actually improve their roster.