If You Are A New York Jets Fan It’s Time To Get Out, NOW 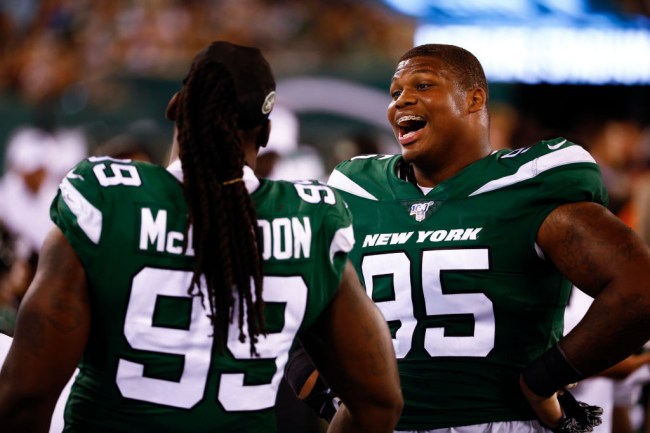 We’ve already written about this story here at BroBible, but I could not help but give my take about the matter as a Jets fan. Just when New York fans thought things could not get worse, well, they just did. The team’s third-overall pick in the 2019 NFL Draft Quinnen Williams was arrested on a weapons charge at LaGuardia airport in New York on March 6.

Talk about coming in all guns blazing to the weekend, Quinnen just could not help himself. To me, it is not the number of games he could miss or be suspended for that bothers me, it is the fact that our new franchise player thought it would be okay to (allegedly) bring a weapon on an airplane.

I am trying to think of all the possibilities to reason with his thought process to put my New York faithful heart at ease. Perhaps Williams had a friend working at a Shake Shack at the gate that he was kindly dropping it off for? Maybe he thought he was flying private and forgot he actually booked a flight on Jet Blue instead?

Now before we jump all over the guy, we do have to remember that he did have a concealed weapons permit for the state of Alabama.

I guess that softens the blow just a little bit?

I love this man, and for those who saw him in interviews prior to the 2019 NFL Draft know that he is an absolute content machine.

With that being said, there’s no doubt for Jets nation that this is just another blow to a franchise that has given its fans nothing to be excited about over the last decade.

#Jets rookie Quinnen Williams talking about @EAMaddenNFL: “I’m going to play with myself today. That came out weird.” [@snyjets]

Robby Berger is the host of the Brilliantly Dumb Show. Listen to it wherever you get your podcasts.