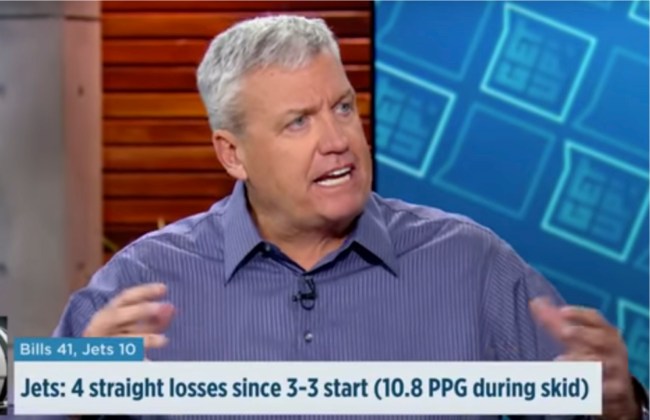 The New York Jets are a dumpster fire that is far from being put out anytime soon. After getting their asses handed to them in a game against the Buffalo Bills yesterday, getting blown out 41-10, everyone is calling for current head coach Todd Bowles to get canned. In fact, things were so piss-poor during yesterday’s game that fans in the Meadowlands were chanting “Fire Bowles” to help urge ownership to make a move sooner rather than later.

After selecting their (presumed) quarterback of the future in this year’s draft, Sam Darnold, the Jets have to keep the rookie signal-caller’s best interests in mind, making sure they develop him under the right leadership. For that reason, it’s clear that Bowles isn’t the man for the job — and former New York Jets head coach, Rex Ryan, was one of those people making sure he states his case as to why Bowles needs to get kicked to the curb right now.

Talking to ESPN’s Get Up crew this morning, the always outspoken Sexy Rexy gave as honest an opinion as possible about the current state of the Jets, as well as some advice on what type of head coach the team should look for next. He both ripped Bowles’ squad and threw the Jets’ general manager, Mike Maccagnan, under the bus. Take a look below.

The main part of the two-minute rant that has to make New York Jets fans excited is Rex Ryan saying he thinks Todd Bowles and his whole staff should be fire now, then offering up his suggestion by saying the next head coach needs to bring the passion back to the beleaguered franchise.

“They’re gonna blow it up, and I hope they get it right,” he said. “Bring somebody in who understands the community, gets that kind of passion, can relate to the fan base and all that and never, ever have a performance like this again.”

The Jets suck. Sam Darnold has no protection or help. And Todd Bowles is a dead man walking. Yep, sounds like the perfect opportunity for a former head coach who was passionate and understood the community, Rex Ryan, to take a jab at them. Keep being you, Rexy.