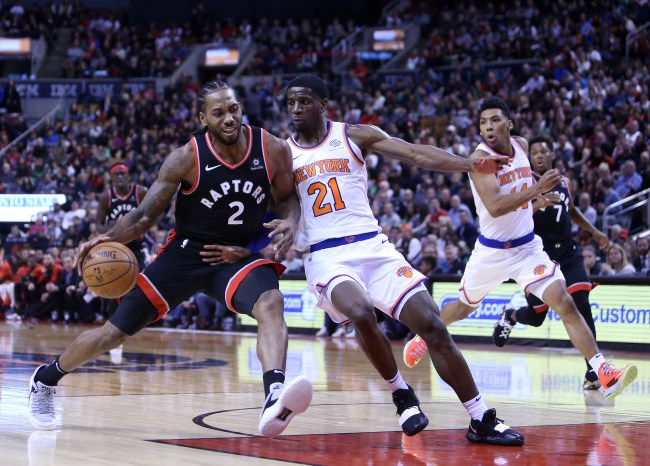 New York Knicks executives were given the chance to meet with kawhi Leonard this week but they turned him down because they apparently didn’t want to miss out on signing other free agents.

According to the NY Post’s Marc Berman, the Knicks were near Los Angeles where Kawhi was meeting teams throughout the week and the team was granted the opportunity to talk to him on Wednesday

The Knicks brain trust of Steve Mills, Scott Perry and David Fizdale were enjoying a laugh on the sidelines of a practice court at UNLV Wednesday, watching summer league practice.

They were a 3 ½-hour drive from Los Angeles, where in an alternate universe they would have been meeting with Kawhi Leonard.

According to a source, Leonard agreed to meet with the Knicks, but not until Wednesday after finishing with the Clippers and Lakers.

The team backed out of the meeting because they didn’t want to want to wait and miss out on signing free agents that were on the market.

As it played out, when Kevin Durant turned up his nose at the Knicks, the club realized any chance of nabbing Leonard without KD was a long shot.

The Knicks had spent almost all of their $70 million cap space in the first 20 hours of free agency, knowing if they waited until the Leonard meeting Wednesday, the players they did sign could be off the market. It was too big a risk, knowing they likely would finish fourth behind the Raptors, Lakers and Clippers.

As it stood, Leonard reportedly flew back from LA to Toronto on Wednesday for the final meeting. The Knicks only can hope Leonard re-signs for one year with Toronto and becomes a free agent again in 2020. Five of the six free agents the Knicks signed are on one-year guarantees. Only Julius Randle got multiple years.

Knicks fans were not happy about the report and bashed the team.

You can't make a talent like Elfrid Payton wait

Okay I am going to just have to actively stop being a knicks fan now. It is over.

Nice to see the Knicks are taking the same approach with Kawhi that I took with Jennifer Love Hewitt in grade school. https://t.co/oXhXRW9mV6