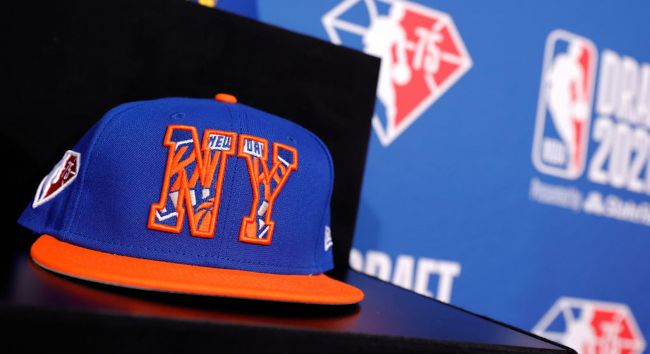 As a former New Jersey Nets fan, I’ve been without an NBA team for a decade now ever since the organization traded in the Izod Center (lol) in East Rutherford (also lol) for the Barclay’s Center in Brooklyn.

Due to my lack of genuine rooting interest in any of the NBA’s teams, I quite often find myself enjoying the misery that the Nets seem to constantly find themselves in, made worse by the purgatorial fact that they usually seem to be on the *brink* of greatness. This, my friends, is known as the Curse of New Jersey. In case the likes of The Sopranos haven’t already taught you, you don’t wanna mess with us.

And as for the Knicks, well… the Knicks have been a trainwreck virtually my entire life. I have faint memories of the Ewing teams from the late 90s and the Sprewell/Houston days from the early 2000s — even that *one* fun season with Melo and Amare back in 2012 — but other than that, it’s nothing but disaster after disaster.

Thursday night’s 2022 NBA Draft was just the latest examples of the Knicks Knicksing, as fans and NBA reporters alike we left properly confounded by the team’s draft night moves, which were the following:

What the Knicks did tonight:

Needless to say, all sorts of Knicks fans — from regular joes getting their hot takes off on Twitter to Stephen A. screaming on ESPN — were furious with the team’s apparent “strategy”:

Knicks saw the Nets looking like the biggest fuck ups in the city today and said not on my watch https://t.co/3kMM50ZbwQ

Stephen A Smith is a comedian and roasting the Knicks is one of his best bits. https://t.co/TXvduPwciv

Whatever the Knicks are doing, they might want to leak it now before the torches and pitchforks converge on MSG.

Everytime the Kings look like the dumbest organization ever the Knicks take it as a personal challenge.

Recapping the first round of the Knicks' draft: pic.twitter.com/0iH0S7zEvk

ME TRYNA FIGURE OUT WTF THE KNICKS DOIN RN pic.twitter.com/QzJpcJNlQR

Knicks fans every year after their team makes a pick:pic.twitter.com/80xJ0R9bZH

We’ll wait for more details b/c this is difficult to believe https://t.co/DwWNIFPhEj

"So the Knicks don't have anyone."

Two Knicks fans trying to figure out what just happened is comedy 🤣 pic.twitter.com/5R9BBkNCuZ

Explaining everything the Knicks did tonight pic.twitter.com/fLgLuRa3mN

THE KNICKS GOT THEIR MAN pic.twitter.com/DALLzgbOOZ

“The Knicks are moving back, sources tell ESPN.” pic.twitter.com/9ICIq0OwdB

summary of what the Knicks did tonight: pic.twitter.com/zc2hZPtoZ7

RELATED: Adrian Wojnarowski Is The Most Powerful Man In Vegas After Sending Sportsbook Into An Absolute Panic For The NBA Draft