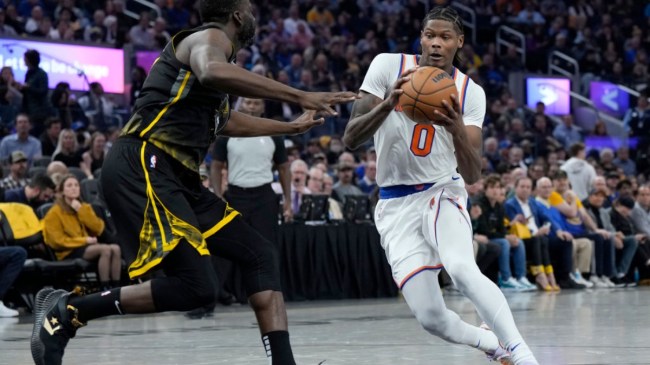 At last year’s NBA trade deadline, the New York Knicks had a lot of issues they needed to fix.

Unfortunately, they didn’t end up really doing anything to help themselves.

Instead, they made a move that has given them a problem to fix ahead of this season’s trade deadline.

That move was a trade that saw the Knicks send Kevin Knox and a first round pick in exchange for Cam Reddish, Solomon Hill, a 2nd round pick, and cash.

The trade hasn’t worked out at all as the Knicks front office would have hoped.

Reddish has struggled to become a part of the Knicks’ rotation since being traded to the team and this season he isn’t a part of the rotation at all.

Reddish hasn’t even appeared in a game for the Knicks since December 3rd.

Now it appears the Knicks are ready to lower their asking price and just take a loss on the failed Reddish experiment.

According to NBA insider Marc Stein, the Knicks are now only looking for a 2nd round pick in exchange for Reddish and there are 3 teams currently showing interest in a trade for the 4th year player.

Those 3 teams are the Dallas Mavericks, Milwaukee Bucks, and Los Angeles Lakers.

At this point, going literally anywhere else would be better for Reddish than continuing to waste away on the Knicks’ bench.

For the New York Knicks, they’ll probably just be happy to get anything in return for Reddish instead of just letting him walk at the end of the year.

For any of the 3 teams currently interest, Reddish could provide a nice spark off of the bench in the second half of the season.

We should see Reddish in a new uniform before the trade deadline passes.