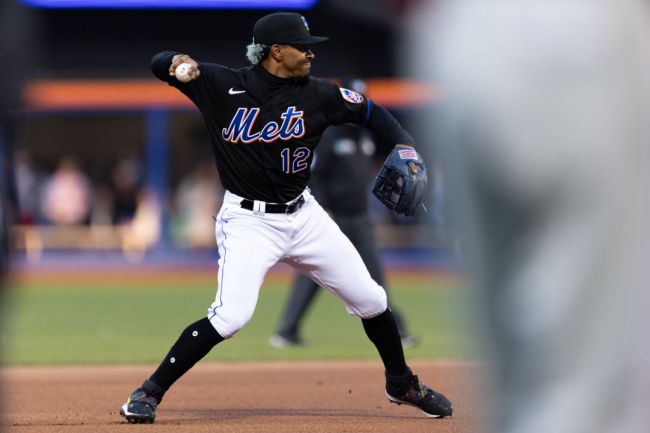 It wasn’t that long ago that Francisco Lindor and New York Mets fans weren’t exactly seeing eye to eye. Back in August, Lindor and Javier Baez had decided to give a “thumbs down” to Mets fans after becoming unhappy with the way fans had turned on the team.

Things have really changed in the last 9 months. The Mets have been red hot to start the MLB season, winning 16 of their first 23 games of the year and opening up a 3 game lead in their division.

Meanwhile, Lindor has been hitting .281 to start the year and has driven in 14 runs while scoring 14 of his own. Everything seems to be going pretty well for Lindor and the Mets right now.

In fact, things are going so well that Lindor doesn’t even need to be focusing on the game he’s playing to make big plays. Last night, during a game between the Mets and Phillies, Lindor was having a chat with ESPN when he turned an inning-ending double play.

Francisco Lindor just casually fielded a ground ball coming at 102 MPH and turned a double play *while being interviewed*. That was freaking sweet. pic.twitter.com/8upvimT7bU

The moment came in the top of the 3rd with the Mets ahead 2-1. Lindor was in the middle of answering a question during a mid-game interview when Rhys Hoskins ripped a ground ball at Lindor. Lindor fielded it cleanly, flipped it to Luis Guillorme, and Guillorme made the throw to first to finish the double play.

The Mets would go on to win the game 10-6 and Lindor was able to finish his interview in one of the smoothest ways possible.