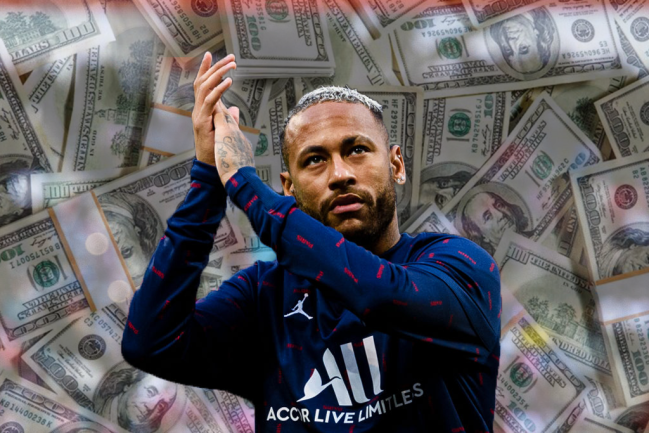 It is well known that Paris Saint-Germain superstar Silva Santos Júnior, better known as Neymar, is a made man. But as for just how made, it is rather astonishing.

He makes more than $100 per minute that he is alive.

The 29-year-old forward’s staggering, almost unbelievable wages have been made public after his contract was recently leaked. According to El Mundo, Neymar will earn $345 million for his first five seasons with the club.

And that’s just the base salary.

After making $69 million per year for five years, Neymar will have the option to activate a renewal clause to stay for a sixth year. If he opts-in, his single-season salary will raise to a heart-stirring $80 million.

That comes out to more than $1.5 million per week in year six.

In addition to his astonishing salary, Neymar also receives a unique bonus that pays him more than $10.4 million per year. According to El Mundo’s report, PSG pays Juninho an ethics bonus of $867,000 per month.

The terms of said bonus pay him to be “polite, punctual, friendly and available to fans.” He is also prohibited from publicly criticizing the club, its ownership, its coaching, or the on-field tactical approaches.

Basically, if Neymar shows up to things on time and smiles, he cashes a cool $10 mil. That puts his total money paid out per year at $79 million for five years and $90 million for year six.

If he chooses to stay for the full length of his contract, Neymar will earn $485 million in total from PSG. That doesn’t include the record-breaking $263 million that the French club paid to Barcelona for his transfer in 2017.

Here is how Neymar’s contract breaks down in terms of life:

Neymar’s enormous salary at PSG, coupled with Kylian Mbappe and the arrival of Lionel Messi, completes the most expensive attack in the entire soccer world. Clearly, based on the structure of Neymar’s contract alone, money is no object for the French side.