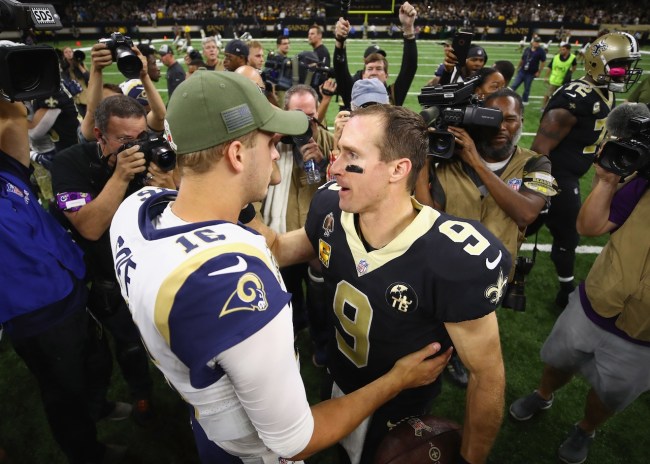 This weekend’s NFC Championship Game against the New Orleans Saints and Los Angeles Rams pits two of the most explosive offenses in the NFL against one another. With each team’s quarterback passing for at least 3,992 yards and 32 touchdowns during the regular season, it’s assumed that Drew Brees and Jared Goff will light up the scoreboard once the game kicks off and be involved in quite the shootout.

With both the Saints and Rams averaging over 30 points per game, it makes sense that the current betting odds in Vegas for the over/under sit at 56.5, which actually might be a little low given the matchup of both offenses playing in the game. But, if you have some serious balls, you might want to take a flier on a bet that could have some serious return.

That’s because, according to Darren Rovell’s Twitter account, the William Hill has set the odds that no team will score a touchdown in the NFC Championship Game at an absurd 750/1. That means that, yep, if you drop just $10 — and it actually, somehow happens — you’ll get a payout of $7,500. Take a look at the tweet below from Rovell.

William Hill has set the odds of no touchdown happening in the Saints-Rams game at 750/1. Anyone?

Given the fact the NFC Championship Game is a rematch from a Rams-Saints game in the Superdome that finished with a final score of 45-35, it’d be wise to stay away from such a bet. Still, sh*t, maybe something miraculous happens and both teams just can’t punch it in, with both defenses playing the whole “bend but don’t break” style, making each other kick field goals for points? Or, maybe both quarterbacks forget how to throw the ball and turn it over a bunch in critical spots, costing their team a chance to get into the end zone?

OK, so that’s all as likely as you or I watching a supermodel walk over to our table at a bar to slip her number, but, hey, there’s at least a chance it can happen, right? If you’ve got a couple bucks laying around — and don’t mind, presumably, losing it — go ahead and take a chance here. You know what they say, you can’t win if you don’t play.