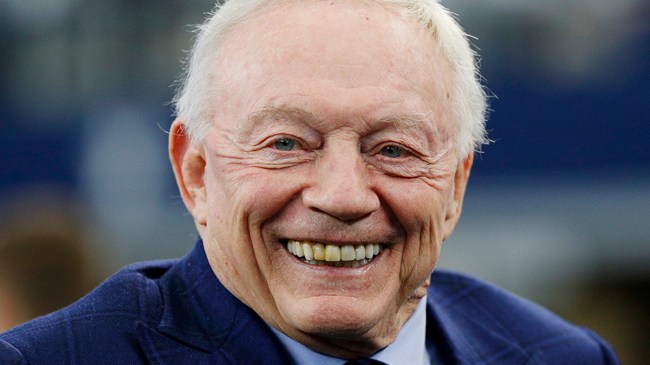 That reality is reflected in the fact that Dallas is consistently ranked as the most valuable organization in the league; the most recent estimation has the team’s worth sitting at around $7.6 billion, which is close to $1.5 billion more than the second-place Los Angeles Rams.

As a result, it’s safe to say Jerry Jones has gotten one hell of a return on the investment he made when he purchased the Cowboys for the modern equivalent of $334.5 million in 1989. While their performance over the past couple of decades may leave a bit to be desired, it’s impossible to ignore the influence its owner has managed to have in Dallas and beyond—a reality that’s reflected in a survey that was recently conducted by The Athletic.

On Monday, the outlet published the results of a questionnaire it handed out to 26 different NFL agents concerning a variety of different topics, including one question that asked them to name who they consider “the most powerful person in and around the league.”

The fact that sixteen of the respondents went with Roger Goodell shouldn’t come as a huge shock when you consider the amount of power that comes with being, you know, the commissioner of the NFL.

However, the fact that six different people voiced their support for Jones is somewhat surprising—as is the fact that one unnamed agent dubbed the Cowboys owner the league’s “shadow commissioner” while arguing his case, saying:

“Hands down, without a doubt, No. 1, and anyone who says otherwise is an absolute idiot.

Jerry Jones is the shadow commissioner of the National Football League. …He has made more rain for more owners than any man in the history of professional football in America.

He single-handedly backstabbed Dean Spanos and the Chargers organization with what he did for Stan Kroenke in the Rams deal, which was obviously in the best interests of the NFL.

He’s made Roger Goodell his puppet. He’s involved intimately in almost every marketing deal that the NFL has done over a billion dollars. And he has brought the windfall to all of these owners.”

If you’re curious, Tom Brady was the only other person who was named by multiple people (two agents lobbied for the QB). Bill Belichick also received a single vote, while two of Jones’ fellow owners—New England’s Robert Kraft and Rams head honcho Stan Kroenke—rounded out the list