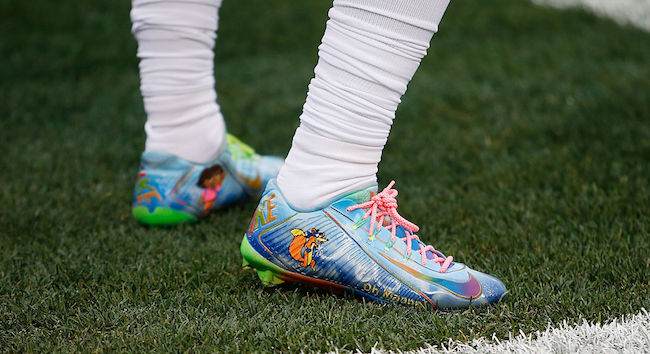 Over the past few years, the NFL has gained a reputation as the “No Fun League,” and for good reason. The league has instituted and stringently enforced a number of rules seemingly designed to suck the fun out of the game for players and fans alike, including flag-happy referees putting a damper on any celebration that shows the faintest amount of creativity and league officials who are overly eager to slap players— including Odell Beckham Jr., DeSean Jackson, and Antonio Brown—  with fines for having the nerve to wear custom cleats onto the field.

Thankfully, it seems like the NFL is finally coming to its senses. A few months ago, the league announced they would be relaxing their rules concerning excessive celebrations, and Darren Rovell is now reporting players will be able to wear custom cleats this season— sort of.

During pregame warm-ups, players can wear any design they want, so long as it doesn’t depict commercialized or trademarked logos, other than the league-approved footwear brands (Nike, Under Armour and Adidas). The cleats also can’t have anything that would be deemed offensive or express political views.

Players were previously banned from wearing custom cleats on the field at any time. They will not be allowed to wear them onto the field during the actual game, although the league is relaxing their standards in regard to that aspect as well. In the past, cleats had to match the team’s dominant color, but players this season will be allowed to wear “solid black, solid white or a secondary team color.”

In fairness to the NFL, the league allowed players to wear custom cleats for a week last year as part of the My Cause, My Cleats campaign. The only catch was that the cleats had to be connected to a cause that players deeply cared about— a clause that the Eagle’s Dorial Green-Beckham failed to adhere to when he wore shoes designed by Kanye West in support of the non-existent “Yeezy Foundation.”

It’s unclear if Yeezys will be allowed on the field during games this year, but at least the NFL is making strides in the right direction.