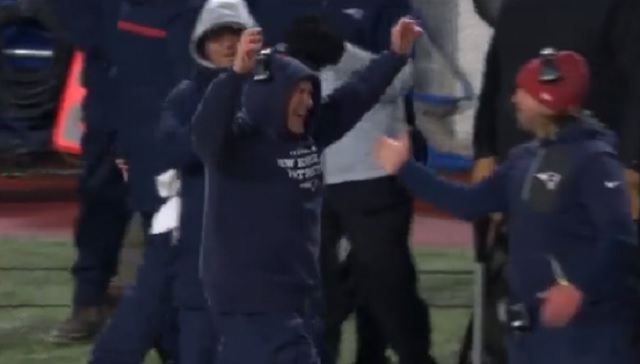 Bill Belichick had the perfect game plan for the terrible weather conditions in Buffalo.

Before the game, we saw several videos showing the awful conditions in Buffalo that included wind gusts of up to 50 mph.

Gunner Olszewski throwing the football in the air to himself and watching it blow away. pic.twitter.com/zdSyopcvlB

Instead of throwing the ball against the wind, Belichick decided to run the ball down the Bills’ throats. The Patriots ended up running the ball 46 times while only throwing the pass three times in the team’s win.

The Patriots won tonight completing 2 of 3 passes for 19 yards. The 2 pass completions are tied for their fewest in a single game in franchise history.

The three pass attempts are the fewest in a single game in franchise history. pic.twitter.com/RQAz85UXLY

Belichick seemed to enjoy winning this particular game more than others because he was actually seen smiling on the sidelines.

Out of all the crazy moments in this game, Bill Belichick smiling and showing emotion is by far the craziest. 😂 pic.twitter.com/UlIiZWPTJi

Bill walked into McDaniels office and slammed a 1950’s playbook on his desk and walked out.

Belichick when Josh asks if they should keep running: pic.twitter.com/QxhAWpJY1D

Everyone: throw the ball

Bill Belichick clowned Sean McDermott tonight. Don't get it twisted. Beat him in his house and had his rook QB throw it 3 times. What a joke.