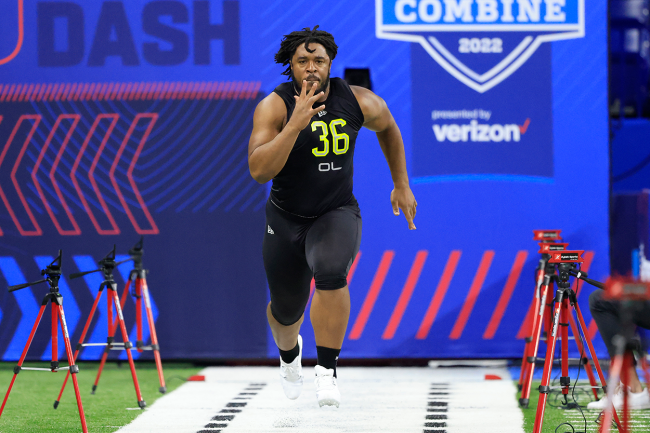 When Dylan Parham enrolled at the University of Memphis in 2017, he was a two-star defensive end prospect. Now, about five years later, he is expected to hear his name called on the second day of the NFL Draft as a center.

A large (pun-intended) part of Parham’s rise comes with an incredible weight transformation. It also took time and development.

Over the course of his four years as a starter with the Tigers, Parham played left guard, right tackle and right guard. He never played center, but is projected to move inside on the next level and analysts believe that he could contend for a starting job at the position next season after not playing anywhere on the offensive line until the spring of 2018.

Memphis lineman Dylan Parham’s impressive evolution on the field is one thing. His literal growth off of the field is another.

Over the course of the last five years, the Georgia-native has added a pretty insane amount of weight to his frame. About 55 pounds, to be exact.

When Parham first arrived on campus in Tennessee, he weighed-in at 256 pounds, which was up from his high school weight. From there, he got in the weight room, changed his diet and started to pack on the pounds.

His body has completely changed and, based on his third-round draft projection, it has worked out for him. A before/after photo of his transformation at Memphis really puts things into perspective. Parham looks completely different.

Go to a place where they DEVELOP players! @dilly_pill is soon to be a high NFL draft pick! 💪 pic.twitter.com/UqCx0S03Rw

At the NFL Combine earlier this spring, Parham put up some really impressive numbers after weighing-in at 311 pounds.

Wherever Parham ends up, he is going to make that franchise very, very happy. It has been quite the impressive journey from 256-pound, two-star freshman to 310-pound (projected) third-round draft pick.