Put The NFL On Notice, It’s Looking Like The Patriots Are Going To Trade Up To Draft Justin Fields On Thursday 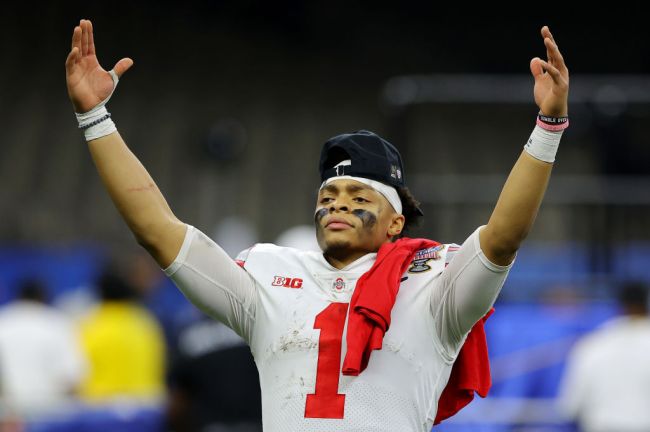 The closer it gets to Thursday’s NFL Draft, the more likely it seems that the Patriots are going to end up landing their future at quarterback. Analysts, insiders and commentators alike are buzzing over the fact that Bill Belichick and company have their eyes on a signal-caller and it’s starting to shape out to where a specific name is at the forefront. New England currently has the No. 15 overall pick, but the overarching belief is that after the organization’s recent draft struggles, Robert Kraft wants to make this year a priority and is willing to pay the price for a franchise-changing player.

👀 Mel Kiper Jr just now on Get Up on the Patriots:

“Not shocked but really surprised if they didn’t move up from 15” #Patriots #NFLDraft pic.twitter.com/FTRrkk8wvf

Couple that notion with a few recent reports and we might have a decent idea of how things will shake out. Let’s take a look:

This is a done deal. Touted as the top quarterback in his draft class since he was 14 years old, Clemson’s Trevor Lawrence is headed to play for Urban Meyer in Florida.

Recent reports have alluded to the Jets going west with the second overall pick. All signs point toward BYU’s Zach Wilson heading to the Big Apple, which may or may not be confirmed by his most recent Instagram follow. This pick could flip to Justin Fields at the last moment with a sudden change of heart inside the organization, but it doesn’t look that way. If all goes as believed, the Mormon Manziel will be wearing green next season.

This pick is coming down to one of two national champions, both on different levels of the game. Everyone with knowledge of the team has come out and said that the 49ers are eyeing either Alabama’s Mac Jones or North Dakota State’s Trey Lance.

The #49ers’ focus at No. 3 appears to have narrowed to Mac Jones and Trey Lance, who has spoken to SF again since his second (Kyle Shanahan-influenced) pro day last week. @gmfb @nflnetwork pic.twitter.com/f9mg931lCL

Without the NFL Combine this year, Lance threw in front of scouts at two separate Pro Days. The second Pro Day came to fruition primarily because of San Francisco head coach Kyle Shanahan, who is really high on his athleticism and potential. Jones is also of interest after finishing third in Heisman Trophy voting in the fall behind his winning wide receiver and Lawrence.

Here is where things get really interesting. Atlanta has a lot of needs that could be met later in the first round, so trading back isn’t a far-fetched idea. However, the Falcons are at the tail end of quarterback Matt Ryan’s contract and potentially his tenure with the team. Could they draft a quarterback here if their ideal prospect falls? Potentially, but more than likely no.

This flexibility at four leaves a lot of wiggle room for a team like the Patriots to move up and take one of the remaining arms on the board. From this scenario, New England could move into Atlanta’s spot for whomever San Francisco doesn’t pick between Lance and Jones— or, if New York takes Wilson as expected — Fields.

NFL Network and FOX analyst Peter Schrager had this to say regarding the fourth pick, which he has being traded to the Patriots to select Fields:

This would be a trade that rocks the NFL, but I don’t think it’s too crazy. The Patriots don’t envision having a pick as high as they currently do (15th) anytime soon, and this is their year to make a big move if they’re ever going to get their blue-chip QB to develop. Fields was a highly recruited player who performed on the biggest of stages. This year’s first- and second-rounder (No. 46) plus next year’s first and third could be enough for New England to get Atlanta to move back 11 spots.

This thinking corresponds with other reports regarding Belichick and New England’s interest in moving into the top 10 to take the former Ohio State quarterback.

Several teams have been making calls about getting into the top 10 of next week’s NFL Draft — including the #Patriots, who could have their eyes on Ohio State QB Justin Fields if he begins to slide. @gmfb @nflnetwork pic.twitter.com/GjJazJXZQp

Let’s say that Atlanta does draft a quarterback, whether that be Wilson, Fields, Lance or Jones. That would leave one of the four, probably the latter three, on the board with the fifth pick. Cincinnati has Joe Burrow. It doesn’t need a quarterback. Could New England move up here to take the last remaining “top tier” quarterback? Quite possibly.

Or, if the Falcons don’t take a quarterback and choose to stay put at No. 4, that would likely leave two of Fields, Lance and Jones to be drafted. The Patriots could easily trade up for any of the three.

No matter how the first three picks shake out, there is a very realistic scenario that sees New England landing a quarterback in the Top 5 on Thursday night. Whether that ends up being Wilson, Lance, Jones or Fields is yet to be seen, though Fields seems to be the target for which the front office is smitten if he starts to slip. It’s also possible that the Patriots stay put at 15 and take a Kyle Trask, Jaime Newman, Kellen Mond or Davis Mills in that spot or later on in the week. Cam Newton is slated to start in Foxborough this fall, but there may be someone breathing down his neck in the quarterback room come training camp.