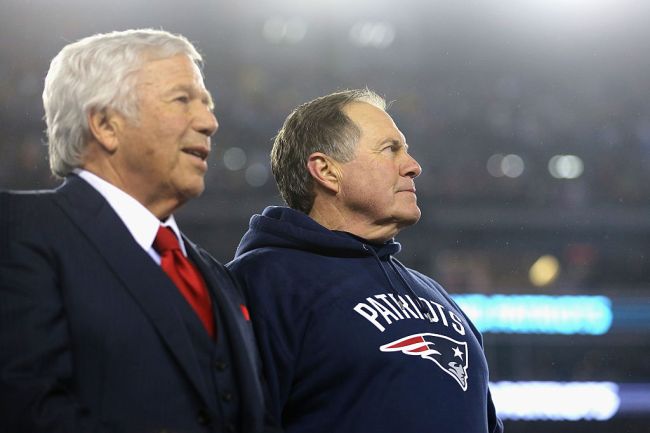 Last week, the organization’s owner Robert Kraft made some interesting comments about the importance of this year’s selections, and the draft process in general.

“Really, the teams who draft well are the ones who will be consistently good,” Kraft told reporters last Wednesday. “I don’t feel like we’ve done the greatest job the last few years and I really hope and believe I’ve seen a different approach this year. In the end, it all comes down to what happens on the field and how people execute and you really don’t know how good a draft is for at least two years.”

The “two years” portion of his blunt, candid assessment of the team’s recent draft failures is particularly interesting, considering its 2019 selection of wide receiver N’Keal Harry. Through his first couple of years in Foxborough, the 23-year-old out of Arizona State has recorded 45 catches on 81 targets for 414 yards and four touchdowns. In comparison, A.J. Brown was selected after Harry and has made 122 catches for back-to-back 1000-yard seasons and 19 touchdowns.

Albert Breer of SI.com recently reported that Belichick ignored his personnel department in drafting Harry over Brown and Deebo Samuel, who were both considered better prospects by the team’s scouts.

FROM THE ARTICLE: Where most teams had draft meetings with their scouts in February and April, the Patriots would have theirs with scouts in December and February. And at that early point, it’s tough to set the board, with two and a half months of information still to come. So from there on, the scouts would just be gatherers, which frustrated plenty of them, and played into the exodus in the scouting department the last few years. It also, as some saw it, led to misses like N’Keal Harry in 2019. Harry killed his 30 visit that spring and had a college coach, Todd Graham, who was close to Belichick. In that end, without more input from scouts who preferred Deebo Samuel and A.J. Brown, the coach wound up leaning on his own experience with Harry, rather than the red flags his scouts planted, and lost a golden opportunity to fill a hole on his roster.

Belichick has been known to find some diamonds in the rough during the later rounds of the NFL Draft, but it’s hard not to recognize the team’s poor history of drafting and developing high-to-mid round players— particularly at wide receiver. Some of the receiver busts include Harry (who could still turn it around), Malcom Mitchell in 2016, Aaron Dobson and Josh Boyce in 2013, Taylor Price in 2010 and Chad Jackson in 2006.

There are two ways to interpret Kraft’s comments. The first is that he references a “different approach,” to indicate that Belichick is more open and receptive to hearing those in the building who are focused on scouting and drafting year-round.

With that being said, he could also have been reffering to the fact that New England’s former Vice President of Player Personnel Nick Caserio left for Houston in the offseason. It could also be true that after Kraft’s comments, Caserio could have been the one to tell the story of Belichick choosing to draft Harry in order to deflect any criticism away from himself.

Regardless of whether Kraft was calling out Belichick, Casiero or both, the Patriots’ need for a sure-fire pick at No. 15 in 2021 is crucial. Many experts and analysts think that New England may seek a quarterback (specifically Mac Jones) in this year’s draft, but with a deep wide receiver class available, maybe this is the year that they finally get it right at the position.