NFL Fans Remind Dwayne Haskins About His ‘The League Done Messed Up’ Quote, Compare Him To JaMarcus Russell After WFT Cut Him 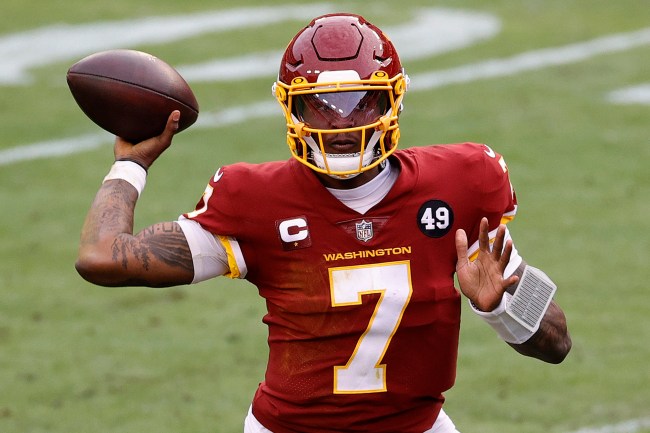 Dwayne Haskins is officially out in Washington just a week after he was seen violating Covid-19 protocols by hanging out mask-less at a nightclub.

Washington has released QB Dwayne Haskins, per me and @TomPelissero.

Washington released quarterback Dwayne Haskins on Monday, hours after coach Ron Rivera said either Alex Smith or Taylor Heinicke will start the regular-season finale with the NFC East at stake.

Rivera is “optimistic” Smith will be ready to play at the Philadelphia Eagles after missing the past two games with a strained right calf. Haskins started those two games, both losses, is 1-5 this season and turned the ball over three times in a 20-13 defeat to Carolina on Sunday that saw him benched for Heinicke.

Immediately after the WFT released him, fans quickly reminded Haskins about the time he said “the league done messed up” after he was drafted 15th at 2019 NFL draft.

Through 2 years of their career

JaMarcus Russell and Dwayne Haskins looking at each other pic.twitter.com/EoNaiyrXqN

I’m going to tell my kids this was Jamarcus Russell pic.twitter.com/QJQDJSwuw0