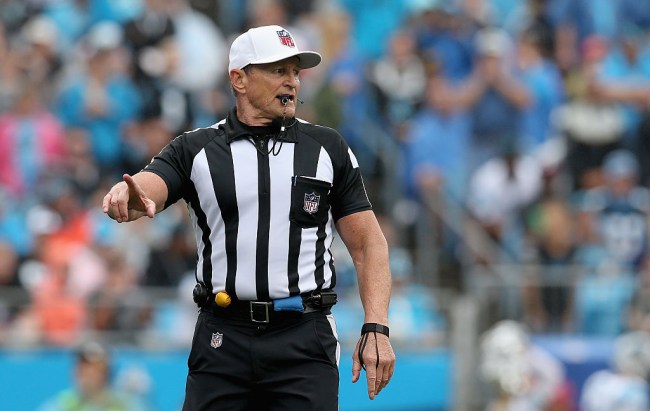 Longtime NFL referee Ed Hochuli has called it a career and his riding off into the sunset.

According to ESPN, Hochuli has retired from the NFL and will be replaced by his son Shawn.

NFL referee Ed Hochuli has retired, the league announced Tuesday, ending a colorful career that made him one of the most recognized game officials in American sports.

Ed Hochuli is the second referee to retire since the end of the regular season; Jeff Triplette’s retirement was confirmed in January. Triplette will be replaced by side judge Alex Kemp, the league announced.

Hochuli’s pending retirement has been rumored in league circles for months, but he refused on multiple occasions to confirm it publicly. He spent part of last week in his new role as an independent consultant, meeting with the NFL’s competition committee and other football operations officials.

Of course everyone on the Internet couldn’t help themselves and had to make the same joke about the NFL banning guns after Hochuli announced his retirement from football.

we're aware Gun Control is a controversial topic these days, and we try to stick to sports, but did we really need Ed Hochuli to retire? #GunShow

With Ed Hochuli retiring, they finally succeeded in taking our guns away.

The NFL is doing their part with gun control today as Ed Hochuli retiring. There will be two less guns on the field without him out there!

Well, you wanted to get rid of Guns…now Ed Hochuli is retiring.#edhochuli #nfl #guns

I guess the NFL is banning guns.

You were one of the good ones, Ed. May we all strive to have your biceps.

Ed Hochuli retiring his guns shows how serious the the #NFL is about gun control.

1) NFL taking “ban guns” debate seriously
2) Is this about gun control?
3) Guns Out
4) The guns have been holstered
5) “NFL is taking the guns away”
6) Hanging up the guns
7) “Young Guns” will be replacing Ed

We’ll miss Ed Hochuli and his huge biceps. Thankfully there’s still one buff referee in town and we can continue making guns jokes from here to eternity.

When you hit triceps earlier today and you want America to be aware. pic.twitter.com/AwWDyFaVpa

Yo Ed Hochuli, do you even lift bro? pic.twitter.com/MAAKCyrAjf