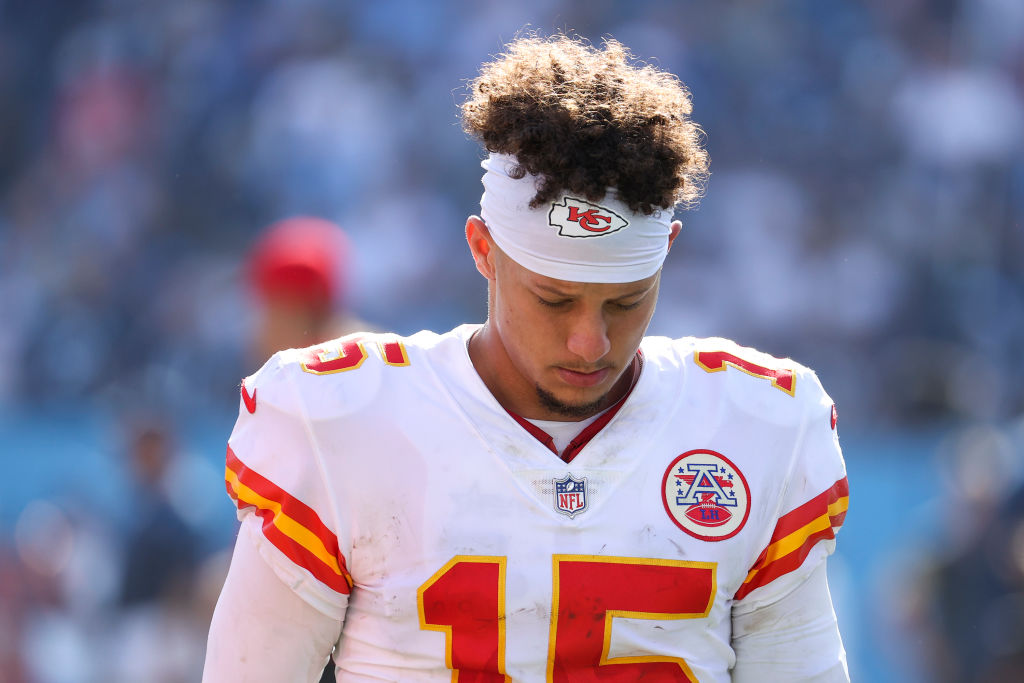 The Kansas City Chiefs came into this season the consensus favorite to win the AFC and return to the Super Bowl. Now, just seven weeks into the season, the Chiefs are 3-4 (3rd in AFC West) and people are speculating if they’re out of the AFC race entirely.

Chiefs quarterback Patrick Mahomes has had a phenomenal start to his NFL career. The 4 losses in 7 games this season already ties his career-high for losses in a regular season (12-4, 11-3, 14-1). Mahomes hasn’t really faced a stretch of tough times in his NFL career until now and that’s something he addressed on Sunday.

In the Week 7 matchup against the Tennessee Titans, Mahomes turned the ball over twice and failed to score a touchdown in a game for his first time as the Chiefs starting QB. It’s already the fifth game this season that Patrick Mahomes has turned the ball over multiple times. Teresa Walker of the Associated Press shared an interesting quote from Mahomes after the loss:

It sounds like trouble in paradise. And if I was a Chiefs fan I’d be reassured by the fact that Mahomes is at least addressing it head-on versus denying or ignoring the team’s troubles.

Football fans on Twitter were quick to respond to that quote from Patrick:

Maybe cut down on the commercials and going to every concert…..

This one refers to the outspoken Mahomes family and the suggestions that could be a distraction for Patrick on the field.

Going to be hard now that he got exposed in the SB last year.

A team that has that much success gets comfortable ! They getting a taste of unknown they will bounce back

Times are going to get tougher pic.twitter.com/PuF7cdvZcb

This is what happens when you actually have to pay the QB. Even then, this team is massively underperforming with the talent it has. Spags will take the hit but does anyone want to throw the idea out that maybe Reid hasn’t been the same since his son put a child in the hospital?

Time for him to Aaron Rodgers his family 😬

… and to help flowers grow bigger and stronger you need to throw some shit at them from time-to-time.

I think can see where Mahomes is going with this comment. 🤔

So he’s not the greatest of all time like everyone has been saying? 🙄

As for whether or not the Chiefs will make the playoffs, this quote from ESPN’s Chalk is pretty telling about Kansas City’s chances:

The Chiefs dropped to 3-4 with a blowout loss to the Titans on Sunday. Kansas City is the ninth team in the Super Bowl era to have a losing record through seven games, despite being favored in all seven games. Out of the previous eight teams, only the 1985 49ers reached the playoffs, according to ESPN Stats & Information.

Mahomes is a generational talent. But teams are figuring out how to get to him and the Chiefs’ vulnerabilities are being exposed. Andy Reid is a great coach and I do think he’ll make adjustments but if it doesn’t come soon it could get REAL BAD for Mahomes.

This kind of reminds me of the Las Vegas Golden Knights. An expansion team who came into existence and knows nothing but playoffs success. Just like Patrick Mahomes has had unprecedented success since he took over as starting QB of the Kansas City Chiefs. When something goes wrong it feels like the sky is falling because he doesn’t know what losing in the NFL feels like. The next five weeks will be very telling.