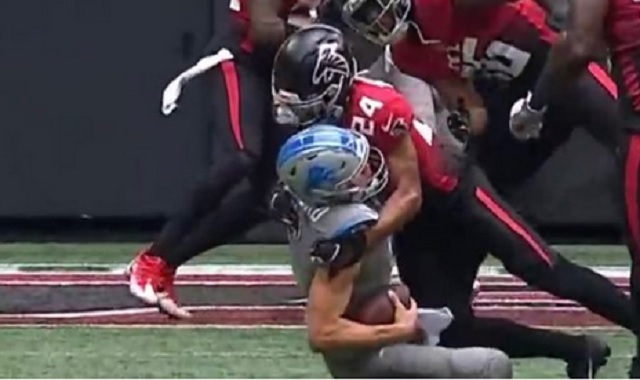 The NFL has gone to great lengths to protect quarterbacks over the years but many fans think the league is going too far with the games are called these days.

During Sunday’s Lions-Falcons game, refs called roughing the passer on the Falcons DB AJ Terrell on what appeared to be a normal sack.

Falcons DB called for roughing the passer for sacking the QB.

Literally tackling the QB. That was it. Called a penalty.

Football is no longer the same game I grew up playing and watching. pic.twitter.com/GecFwsXoc8

I’m a Lions fan but this was roughing the passer? What?! #OnePride pic.twitter.com/I4aWOKpxyp

Fans were not happy with the call and blasted the refs for the call.

This was called roughing the passer, on 3rd down, with Stafford still holding the ball?? pic.twitter.com/vpHQUmAgsL

No idea on how that’s roughing the passer in DET. Stafford had the ball. Clean tackle.

This is roughing in the Nanny Football League. https://t.co/RJyz0rE5zE

This is the reality of Goodell's NFL after passing rule after rule that penalize hitting QBs https://t.co/HhgXnOUaOq