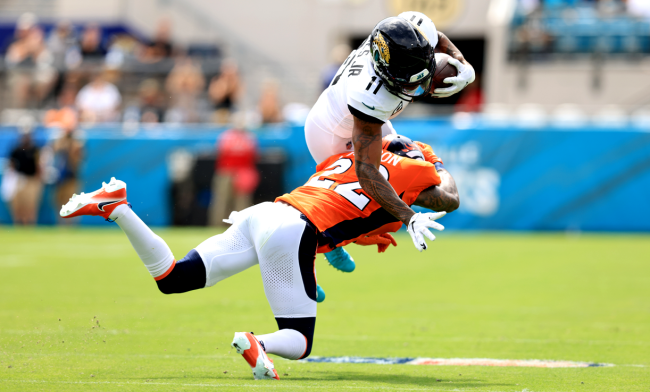 The NFL announced its broadcast schedule for the league’s five international games this year. Included in the announcement was the fact that the NFL will be broadcasting one of the games exclusively on ESPN+.

ESPN and ESPN+ will each carry an international game during the 2022 NFL season, with the first-ever exclusive NFL game on ESPN+ and the return of Monday Night Football to Mexico City. ESPN+ will feature the Denver Broncos at Jacksonville Jaguars from Wembley Stadium in London, England, at 9:30 a.m. ET on October 30 (Week 8) and Monday Night Football will see the San Francisco 49ers play the Arizona Cardinals from Estadio Azteca Stadium at 8 p.m. on November 21 (Week 11). Both games will also be available on local broadcast stations in the markets of the participating teams, with Monday Night Football also airing on ESPN Deportes.

The international games are part of The Walt Disney Company’s 21-game 2022 regular season schedule, with the remaining matchups to be announced next week. To conclude the season, ESPN will televise a Super Wild Card matchup and the Pro Bowl.

The exclusive ESPN+ NFL game this season begins an annual occurrence for the platform, as ESPN+ will carry one international game each year through the 2033 season – the duration of the new rights agreement announced last year. Select Monday Night Football and Super Wild Card games have been simulcast on ESPN+ previously.

This new addition of another streaming service exclusive NFL game now means fans, if they want to watch all the games, will now have to have subscriptions to ESPN, NFL Network, Amazon Prime Video, and ESPN+ in addition to however they get their local channels.

Many NFL fans on Twitter were unhappy with the news about the game, comparing the NFL to Major League Baseball’s terrible record of making it more and more difficult to watch the league’s games.

Making games unwatchable, just like the MLB. How fun.

So on top of people having to pay for Sunday ticket, now they have to pay for for an additional game? I hope they only have 5 people watching.

i got espn plus and yea this is horrible. the main reason why ppl say baseball is dying is cuz games are so hard to access. and now the nfl is following in their footsteps by putting all these games on different services. also, everyone in cali yall gonna be up at 6:30 for this??