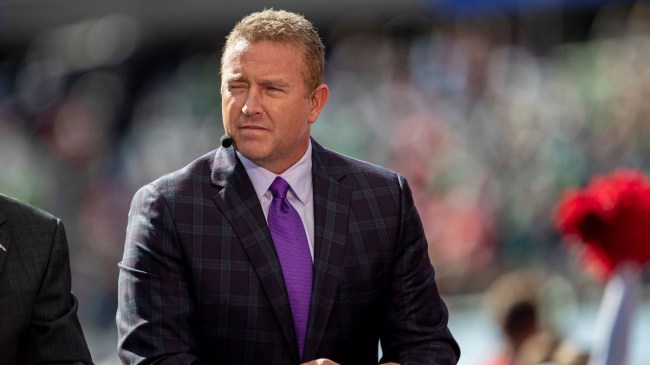 Unless you’ve been living under a rock until now, you’ve probably heard about Baker Mayfield’s incredible performance on Thursday Night Football for the Los Angeles Rams.

Mayfield, who had been on the Rams roster for just 48 hours, led LA to a comeback victory after trailing the Las Vegas Raiders 16-3 with under four minutes remaining. It was, honestly, a remarkable showing by Mayfield. He finished the night 22-of-35 for 230 yards, one touchdown and no interceptions.

For a guy who has been through a lot in the last year of his career, it was a pretty cool moment.

But for a while, it didn’t look like it would be such a happy story. Yes, Mayfield looked solid. Which is, in its own right, impressive given the circumstance. But entering the final minutes of the game, it looked like the Rams and Mayfield were dead in the water. Don’t tell that to Thursday Night Football commentator Kirk Herbstreit though.

Herbstreit spent most of the night drooling over Mayfield, even when it appeared his efforts were futile. Incomplete pass? No matter, Herbstreit was impressed that Mayfield was working through reads. Near interception? “Just look at Mayfield’s arm strength!”

Even as someone who considers themself a fan of Herbstreit’s commentary, it quickly got old. So Twitter did as Twitter does and quickly fired off a ton of tweets slamming the ESPN and Amazon prime commentator.

Kirk Herbstreit talking about Baker like he’s a Make A Wish Kid.

Herbstreit out here acting like Baker is ballin. Dude the Rams have 3 points with 9 mins left to go in the game. Stop the cyse!!!

TNF drinking game for tonight-take a shot everytime Herbstreit mentions Baker has been learning the playbook for 2 days.

slobbering over Baker's 3 completions & then praising him when he is sacked bc he "can't believe he held on to it!!!!!"

The way Herbstreit is talking you’d think Baker Mayfield had found the solution to some kind of theoretical physics problem. We get it. Learning the playbook is hard.

Watching Michaels and Herbstreit talk about Baker Mayfield tonight reminds me of how parents talk about their 7 year old when he does anything for the first time. #TNFonPrime

Ultimately, Herbstreit and Mayfield got the last laugh. And it appears that Mayfield has the inside track to the Rams starting job for the rest of the season so long as Matthew Stafford is out. But it’s still pretty wild to hear a No. 1 overall pick and Heisman Trophy winner talked about as if he were Kurt Warner straight from the supermarket onto the field.