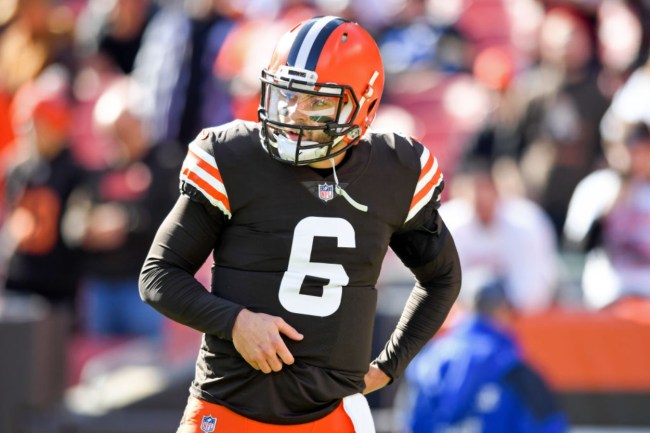 Nobody, not even Baker Mayfield himself, knows where he’ll be playing football next season. He’s been heavily linked to both the Carolina Panthers and Seattle Seahawks over the last month or so, but there could be another contender for Mayfield’s signature as well.

ESPN’s Jeff Darlington joined ‘Get Up’ on Wednesday and threw out the thought of Mayfield becoming a Pittsburgh Steeler.

The NFL insider thinks that there is a possibility Mayfield lands in Pittsburgh, but only if the Cleveland Browns elect to cut him from the roster.

“If for some reason the Browns, and I don’t expect this to happen, were to cut Baker Mayfield, I think he signs with the Pittsburgh Steelers the very next day,” Darlington explained.

Where will Baker Mayfield end up this season? pic.twitter.com/Ucn1eZaIZy

It wouldn’t be in the Browns’ best interest to simply cut Mayfield seeing as how that would mean they’d be getting nothing in return for him. Crazier things have happened, though, and if cutting him wipes the slate clean for Cleveland, maybe the Browns do decide to go that route.

From a Pittsburgh perspective, most Steeler fans would probably welcome Mayfield. The Steelers recently signed Mitch Trubisky and are expected to draft a quarterback, but Mayfield would likely walk into the starting role if he were to be signed by Pittsburgh.

At this point it feels like the Browns are focused on the upcoming NFL Draft and if a Mayfield move won’t be happening until the draft gets started.

Cleveland could also be looking to hold onto Mayfield in case the NFL decides to suspend Deshaun Watson.