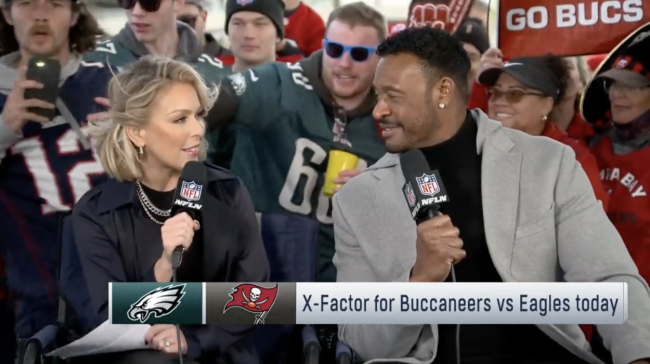 No matter how divided the world may get, the one thing that everybody can agree on is that Patriots fans have had their time in the spotlight. New England and Tom Brady were so dominant for so many years, that it’s time for someone else to take a turn.

Prior to the Buccaneers hosting the Eagles for the NFC Wild Card game, NFL Network went live outside of Raymond James Stadium. Behind Willie McGinest and Colleen Wolfe’s live shot, a crowd gathered with the two fanbases split almost perfectly in half.

However, a New England fan had other ideas. As Wolfe and McGinest were discussing their “X-factor” for the game, a man wearing a Tom Brady jersey wandered into the shot.

Upon arrival, a sunglasses-clad Eagles fan in an offensive line jersey put a quick stop to the video bomb. He immediately stuck his arm out and pushed the Patriots fan out of the shot. Fake Brady never stood a chance.

Patriots fan tried to get some camera time 😂 pic.twitter.com/BtRfUv9est

The entire exchange is hilarious. The Philly fans identified what the Pats fan was doing before he even entered the frame and turned to him with disconcerting looks. When he steps in front of the camera, it is immediate denial. The New England fan’s face is priceless.

To top it all off, Wolfe turned back to the fans, unaware of what had just played out, and asked for an Eagles chant. The sunglasses-wearing Philadelphian was quick to oblige and yelled right in Wolfe’s ear. It was glorious.