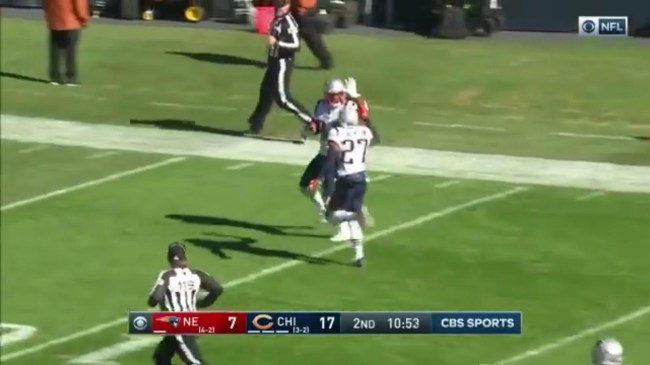 I want to personally thank the New England Patriots for providing a little bit of entertainment this morning. Look, I’m a little hungover after drinking last night, haven’t seen much during these early NFL games that piqued my interest and then, BOOM!, all of a sudden the Pats return a kick-off from the Bears 95 yards, having a little fun before reaching the end zone.

Following a Bears touchdown, New England’s Cordarrelle Patterson took the kick to the damn house. But that wasn’t the most impressive thing about the return, it was the high-five and high step into the end zone before actually getting there. That’s some good ol’ fashioned taunting, right there.

The high-five and high step 💀
(via @Patriots) pic.twitter.com/zyDBGrGLWH

Now, seeing as how Patterson plays for the Patriots — and Bill Belichick wouldn’t know what fun is if it slapped him in the face — something tells me the returner may get a little chewing out on the sideline. Of course, if Tom Brady pretended to ride an imaginary bull with his pants down in the end zone after a touchdown, Belichick would probably volunteer to help him out.

This might not be the Deion Sanders kind of taunting like way back when, but it’s still pretty awesome. I give it an 8.8/10.