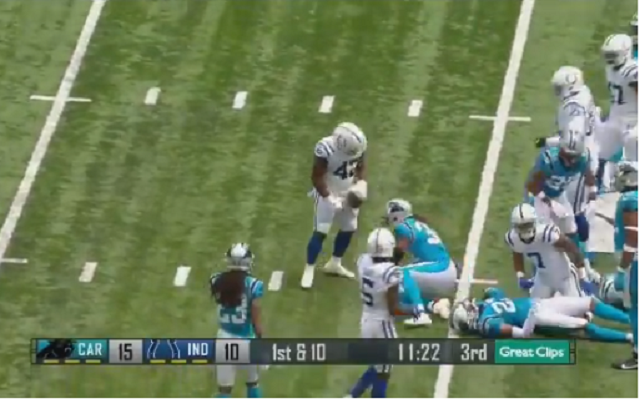 The NFL’s enforcement of taunting penalties seems like it could be a big issue with fans this season.

Last week, the league released a memo stating that enforcing taunting penalties was going to be a a point of emphasis this season after several coaches complained about players excessively taunting last year during meetings with the competition committee this offseason.

“The NFL Players Association, coaches and competition committee have all made a strong statement regarding respect among everyone on the field,” “We saw an increase in actions that clearly are not within the spirit and intent of this rule and not representative of the respect due opponents and others on the field. Game officials have been instructed to strictly enforce the taunting rules, and players and coaches are reminded that two taunting penalties committed by an individual player will result in automatic disqualification. In addition, the taunting player may be fined and/or suspended depending on the severity of the actions.”

On Sunday, we got a glimpse of what may come this season and it’s not pretty. In the third quarter of the Colts-Panthers preseason game, backup running back Benny LeMay was able to push the pile and pick up a first down. After the run, LeMay appeared to say something to the defender who tackled him while tossing the ball to the ref and was immediately penalized on the play.

Taunting is a huge emphasis by the referees this season. Benny LeMay with great effort. However, he was flagged for taunting after the pay.

Fans were not happy with the penalty call and blasted the NFL over the new taunting rules.

So lame for that, No Fun League back in action! That energy what amps the game up!!! If it’s flagrant fine, but that Wasn’t even disrespectful 🙄🙄🙄 https://t.co/TxrUg7rhWd

@NFL wants to take all the emotions out of the game. WTF. #NoFunLeague https://t.co/QCLjKfxDiI

so the @NFL doesn’t want teams to show any emotion at all? Quit making the league soft. https://t.co/oQXSP7Xed5

This is taunting these days? I didn't know the NFL became softer than Charmin in their interpretation of taunting.

Can't wait to see it affect a game during the season. https://t.co/8CXxhsDfgo