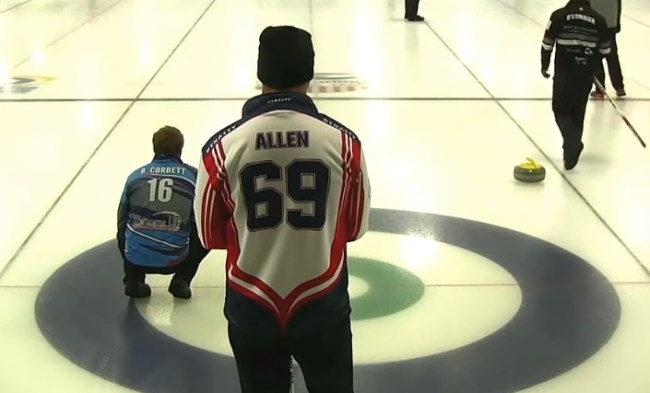 Five-time Pro Bowler Jared Allen retired from the NFL in 2016 and now he is leading a curling team of fellow ex-football players. Allen, seen above with the jersey #69 (nice), said started getting into curling after one of his friends made a bet with him that he “couldn’t become an Olympian.” “It was kind of just talk, and then I started looking at some of the sports I thought I’d be capable of doing,” Allen told the St. Paul Pioneer Press. “I was actually looking at badminton at first, and then it kind of transpired into curling. That’s kind of how everything got started. We thought about curling. It was chill, and the winners have to buy the losers beer. We thought it was a win-win.”

A post shared by All Pro Curling Team (@allprocurling)

In March, Allen recruited fellow former NFL players quarterback Marc Bulger, linebacker Keith Bulluck, and offensive tackle Michael Roos for his all-star curling team. All of the players live in the Nashville area and call themselves the All-Pro Curling Team. The squad has their sights set on the 2022 Olympic games in Beijing. These are the most exciting two-sport athletes since Bo Jackson and Deion Sanders.

Curling facility manager and 2010 Olympian John Benton offered his expertise to the NFL turned curling players. Benton is the team’s coach and is their alternate, who trains the team about once a month at one of the Nashville Predators’ ice facilities. “Their slide was pretty good at three weeks,” Benton said. “They’re not afraid of anything. They had curling shoes with full sliders and they all fell at one point or another but it didn’t faze them.”

The All-Pro Curling Team took on John Shuster’s gold-medal team in their first match on November 30th at the Curl Mesabi Classic. The NFL players got crushed by the score of 11-3. “Honestly, they were a little better than I had expected,” said Matt Hamilton of the winning team. “All in all, Jared was technically pretty sound. But at the end of the day, I’ve seen thousands of curling shots and situations and that is ultimately going to win us more games.”

On Thursday, they played in the U.S. National Championship Challenge Round at the Four Seasons Curling Club and got walloped by the score of 10-1. Later this month, the Pro Bowlers will play in the Ed Werenich Golden Wrench Classic in Arizona where six of the top 40 ranked teams will be participating. On the bright side, if there ever is a brawl during the curling match, the NFL players could beat the crap out of anyone. Roos is 6-foot-7 and 320 pounds, Allen is 6-foot-6 and 255 pounds.

“Every team in the NFL — whether you’re hot garbage or the defending Super Bowl champions — every coach come August says the same thing: ‘We’re trying to win the Super Bowl,'” Allen said. “We come from that mentality, where we set lofty goals. Our short-term goals are to continually get better: Fundamentals, strategy, sweeping. We know if we master these little things, it will take us a long way.”

Good luck gentlemen, keep pushing those stones and plan on buying a lot of beer after you lose.

A post shared by All Pro Curling Team (@allprocurling)