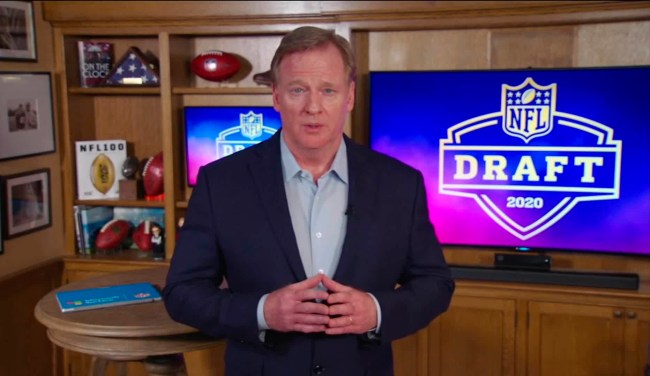 It seems like every year there’s some sort of NFL re-draft where analysts and journalists sit down to re-do the entire NFL Draft from scratch, offering up other picks for teams to start some sort of healthy debate. While it often involves the same players from a certain draft class — i.e. – Patrick Mahomes going No. 1 overall in 2017 — ESPN recently did something a little bit more unique to get fans to talk about football.

Instead of just focusing on a specific year, writers and editors over at the Worldwide Leader decided to do an NFL re-draft where the draft order from 2020 stayed the same, but every single current player was available. That means that, instead of the Cincinnati Bengals drafting Joe Burrow No. 1 overall as they did this year, they’d have any player in the league at their disposal.

Look, we’ve seen this fantasy draft sort of thing play out in a video game like Madden, but what would it look like in real life? ESPN tried to show us, so take a look at the results below.

ESPN did a draft assuming every NFL player was available to be picked. Some interesting choices. Here's Round 1:https://t.co/Qhu1nVPefg pic.twitter.com/FL7YwzKc53

It’s hard to argue with some of those results, but there are certainly some questionable decisions on there for the mock first-round of this NFL re-draft by ESPN.

Mahomes would obviously go No. 1 overall.

Aaron Donald would probably be the first defensive player off the board in real life.

There’d be a slew of quarterbacks going to teams since, you know, that’s the most important position in the sport.

But don’t overlook some of the more eye-popping decisions of this re-draft ESPN put together. Among them? How in the hell is Drew Lock taken No. 15 overall? Or how about Jimmy Garoppolo being picked ahead of all-world wide receiver Michael Thomas. Or how there’s only one running back (Christian McCaffrey) taken in the first-round, leaving off a guy like Ezekiel Elliott, among others.

While ESPN tried something fun to get football fans talking, people on Twitter weren’t having some of the results of this re-draft, and they made sure they voiced their displeasure online. Take a look below at some of the beefs fans had with the fake results.

This is one of the dumbest things I've ever seen.

He isn’t even close. Captain Kirk is better than him.

Imagine taking brees over prescott in a redraft lol…..

Was that thing sponsored by the Bosa family? 😀

Especially when arguably better players like TJ Watt or Myles Garrett aren't even in the Top 32.

Thank you for providing the nation a laugh today. In times like this we really need it.

Doing an NFL re-draft is hard enough, but doing one where every single player is available is even harder. I mean, do you go off pedigree or go off the potential of future success? Hell, I tried breaking down the top-25 current NBA players to start a franchise with and that was difficult AF — so doing a fantasy draft with the entire NFL had to be even more of a challenge. Based off of the anger some fans had with the results of ESPN’s re-draft, it proved to be a little bit tougher than probably originally thought.