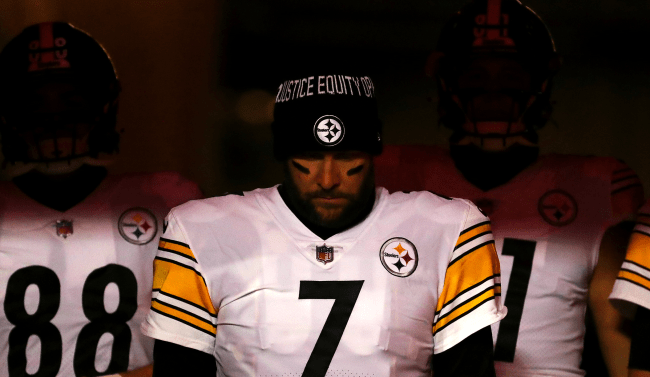 Ben Roethlisberger officially announced his retirement after an 18-year NFL career on Thursday.

“I don’t know how to put into words what the game of football has meant to me and what a blessing it has been,” Roethlisberger says in the video.

“While I know with confidence, I have given my all to the game, I am overwhelmed with gratitude for all it has given me.

“A boy from Finlay, Ohio with NFL dreams, developed in Oxford at Miami University, blessed with the honor of 18 seasons with the Pittsburgh Steelers and a place to call home,” he continued.

“The journey has been exhilarating. Defined by relationships and fueled by a spirit of competition.

“Yet the time has come to clean out my locker, hang up my cleats, and continue to be all I can be to my wife and children. I retire from football a truly grateful man.”

Ben Roethlisberger retires with 64,088 yards passing, 418 touchdowns, and a 165-81-1 record as the Steelers’ starting quarterback.

“I’m happy for him that it’s ended on his terms, in a sense,” Ben’s agent Ryan Tollner said. “He was able to play his entire career for the Steelers and he is walking away from the game healthy, relatively healthy. And that he has been recognized pretty widely here in the sports world for being one of the all-time greats and a true warrior.”

Tollner also added that Roethlisberger already has plans for his retirement years.

“I don’t think he has any aspirations to do anything in the public eye,” he said. “He is so invested in his family and being as present to them as he can be.”

Tollner continued, “He and his dad are working on a plan to host some father-and-son retreats on some land they own outside of Pittsburgh that will be very faith-centered and really try to enrich the bond between fathers and sons.”

NFL fans, the media and Roethlisberger’s peers reacted to the news many expected.

Congratulations on an amazing career @_BigBen7 and good luck in your next chapter. pic.twitter.com/loPuPCkN7U

Ben- There are not enough words in a tweet to do you justice. You gave of yourself over and over again for the love of the game, the love of Pittsburgh,and the love of this Steelers team. There will never be another like you and I am looking forward to your future. -Rock

A legend on and off the field and a true Steeler for life. He will go down as one of the greatest quarterbacks of all time, and he is a first ballot Hall of Famer for sure.

From myself and the rest of #SteelersNation, thank you Ben, and enjoy a wonderful retirement!

Ben Roethlisberger will go down as easily the most accomplished QB in Steelers history when it comes to his passing numbers.

He doubles the next closest person in franchise history in passing touchdowns, passing yards and completions. pic.twitter.com/nzauKFkbou

Big Ben was doing this before Mahomes and Allen were even thought of. The younger generation has no idea how unreal prime Roethlisberger was. https://t.co/kWAouXMjR4

The #Steelers put out a long release listing the many accomplishments of Ben Roethlisberger’s 18-year career. But this was the opening page. And for me, this really drives home the much-needed support and many many sacrifices all football families make… 💛 pic.twitter.com/4GeSKUOoXx