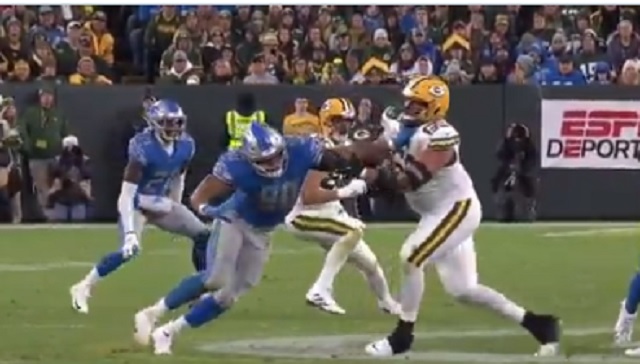 It’s been a tough season for NFL refs.

First, Flowers was called for the penalty when he sacked Aaron Rodgers on third down.

Thanks to the refs keeping the drive alive, Rodgers went on to score a TD a few plays later.

Aaron Rodgers. My God (via @thecheckdown

Late in the fourth quarter Flowers would later get called for another hands to the face penalty that put the Packers in chip shot field goal range to win the game.

I hate blaming the refs, I really think it's lazy and irrational. But the Lions were jabbed hard tonight multiple times. "Hands to the face" pic.twitter.com/wCtBGlQJJt

Lions fans and NFL fans were pissed with the official after the game for blowing the calls.

Two horrific hands to the face penalties on Trey Flowers cost the Lions the game. That’s it. Lions win that game if those two bad calls aren’t made. That’s sick, man.

That is sickening… the @NFL needs to look at a way to prevent that from happening. Two phantom hands to the face calls really hurts us tonight. Yes, we could have scored TDs, but @Lions played too well to have the game end this way. #DETvsGB @espn

For those of you not familiar with this routine:

That’s it. An endless cycle. This is being a Lions fan.

The worst part about the NFL is that officials never face any consequences for their weekly BS.

Players and coaches need to be accountable, but it’s okay for refs to casually decide the outcome of games whenever they want.

NFL officiating is so consistently bad. Jerry Jones used to argue with me that human error among refs is good for the game because it creates day-after controversy and conversation and increases interest. Maybe so. But I'd rather talk about great plays than bad calls.