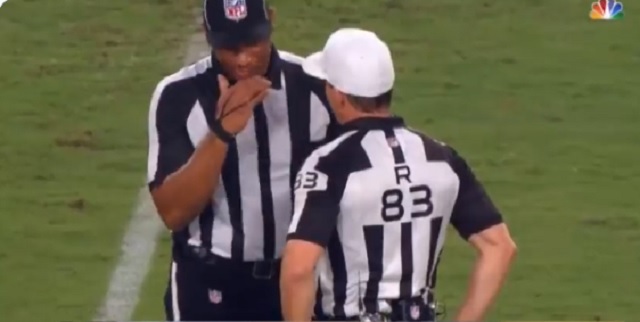 It’s only the first game of the season and fans already believe refs are rigging games.

During Thursday night’s season opening game Bucs offensive lineman Ryan Jensen was penalized for taunting after he mocked Cowboys defensive lineman Carlos Watkins, who got caught throwing a punch in front of a ref.

While discussing the penalty call, one ref told another ref “let’s just say’ before realizing his mic was on and immediately cut it off.

NFL referee forgets to cut his mic before talking to other ref, what were we about to hear #bucsvscowboys pic.twitter.com/Wp3O6ejTRC

Despite an “offsetting penalties” call, fans immediately accused the ref of being up to no good.

aaaaand the fix is in folks https://t.co/yznwZr4VPF

Lmfao Tom got dem boys paid off we cooked https://t.co/qtzOS1xkhp

them refs cheating in 4K lmaooooo