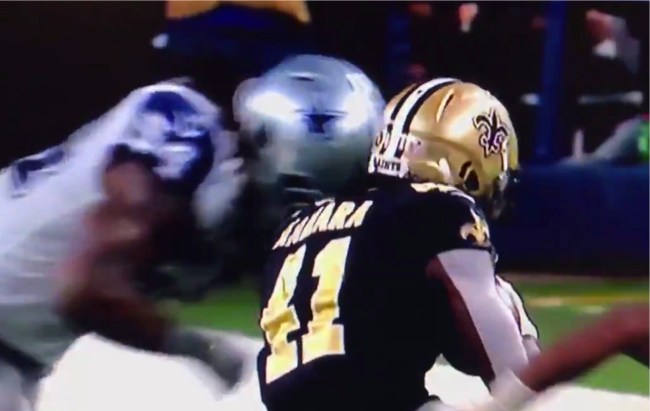 NFL refs have a very difficult job, I get that. They have to keep up with the speed of the game, understand an insane amount of rules and don’t always have the perfect angles to make the appropriate call. But, as difficult as NFL refs have it, there has to be a certain level of common sense when it comes to making a call — and a missed helmet-to-helmet hit on New Orleans Saints running back Alvin Kamara during last night’s Thursday Night Football game against the Dallas Cowboys was one of those missed common sense calls.

It’s that vicious hit on Kamara by Cowboys defender Jaylon Smith that’s grabbed the attention of fans on Twitter, with people up in arms about how the zebras could have possibly missed it. Forget not seeing it — even if it was clear as day — how about the sound it made when the two players’ helmets crashed into each other? Just listen to the slobberknocker and ask yourself how, even if you didn’t see it, that wasn’t a couple domes nailing into one another.

Uh, hey, NFL refs, you might want to take a closer look at that the next time, because that’s clearly leading with the crown of the helmet and is as dangerous of a play as it gets in the league. Try harder, guys.

Following the hit, Alvin Kamara was seen wobbly and sniffing salts on the sideline. And, as soon as FOX cameras showed the replay, the announcers, Joe Buck and Troy Aikman, acknowledged that it should have been an easy call, with former NFL VP of Officiating Mike Pereira calling Smith’s shot a “clear example of leading with the helmet.”

Yet, of course, it wasn’t called.

For his part, Jaylon Smith tried to defend the hit, telling the media after the game that he didn’t intend to hit Alvin Kamara like that, and that the runner just moved his head. Uh, it’s football, the dude needs to protect himself somehow.

"As I went to hit him, he moved his head. That's where the collision happened. There was no intention to [go helmet to helmet]." –

Jaylon Smith called up the @dpshow and talked about his hit on Alvin Kamara last night: #AUDIENCEsports pic.twitter.com/AHkjmi9qlA

The NFL Refs Twitter account — which seems to tweet about every single questionable play call during certain games, especially primetime ones — naturally, ignored this one, refusing to offer an opinion of what happened. None of this seemed to sit well with social media, as the reactions laid into the men in stripes.

What does the NFL actually think targeting is if that hit on @A_kamara6 wasn’t one?🧐🤔

Alvin Kamara needed the smelling salts after being hit with the crown of Jaylon Smith’s helmet and no penalty.

I thought the league wanted these hits out of the game? #NFL #TNFonFOX #Cowboys #NOvsDAL
pic.twitter.com/4b1sVUXafN

Jaylon Smith Somehow Not Flagged For This Devastating Helmet-To-Helmet Hit On Alvin Kamara https://t.co/VJojHSVN3l via @deadspin. If the NFL doesn’t suspend Smith for a game then they need to SHUT UP about player safety!!!

Clear helmet to helmet hit by Jaylon Smith on Alvin Kamara. Not called. How was that missed? Kind of play league wants out of the game.

@NFL The @A_kamara6 hit to the head on play… Wow pic.twitter.com/u0pZoaZLrM

The @NFL sucks. Plain and simple. When hack refs miss this kind of obvious voilation of the rules. I mean, in the video, you see a ref STARING RIGHT AT THE PLAY FROM 5 YARDS AWAY and he misses it. The league is turning into the WWE.https://t.co/BKLoGZzTh8

Alvin Kamara gets smashed right in the head near the sideline.

He struggles to get up for a second.

The replay shows an obvious illegal crown of the helmet hit.

There is no flag.

Kamara then seen sniffing ammonia packet on the sideline.

The @nfl refs call penalties for the QB’s left and right. @A_kamara6 gets that hard illegal hit and no flag!?!?!?! #blowsmymind

NFL refs have done a terrible job calling games all season long, confusing players, fans and themselves on what is and isn’t a penalty. From weak-ass hits to quarterbacks being called roughing the passer earlier this season to missing viciously dangerous hits like this one form Smith on Kamara, forget the officials costing teams games, they could, potentially, cost a player the rest of his career. Do better.