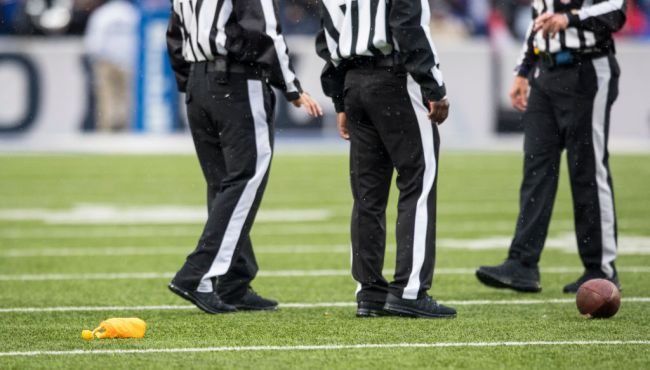 While practically every day during this year’s NFL season we’ve heard about players going on and coming off of the COVID-19 list, we haven’t heard much about how the league has been handling things when referees test positive or are exposed to the virus.

The NFL has decided not to publicize testing results for officials, but it goes without saying that the virus has affected their regular operations this season.

According to ESPN, a number of referees and crew members have been sidelined by COVID-19 protocols and the league has been able to cover for those that have had to miss time with their contingency plans in place.

In Week 15, referee John Hussey had to handle both the Thursday night game and the Monday night game to cover for a referee that had to miss time due to the virus. The same situation occurred last week when referee Adrian Hill worked games on both Friday and Sunday after a referee was removed from the schedule.

It may not be that easy for the final week of the season, however, as all 16 games on the Week 17 slate are scheduled for Sunday, therefore, the league is putting another contingency play in place that involves individuals in the referee training program.

The NFL has a total of 17 referees and crews, one more than it technically needs for a full day’s schedule, but with the possibility of some crew members having to miss time, the league will have to promote an umpire, a down judge, a line judge, a field judge, a side judge, or back judge from the training program to be the lead referee. If that happens, the crew will be made of just six members instead of the regular seven.

With NFL referees getting blasted multiple times during each and every game throughout an NFL campaign, promoting an official from the training program could make for a dramatic final week of the season.