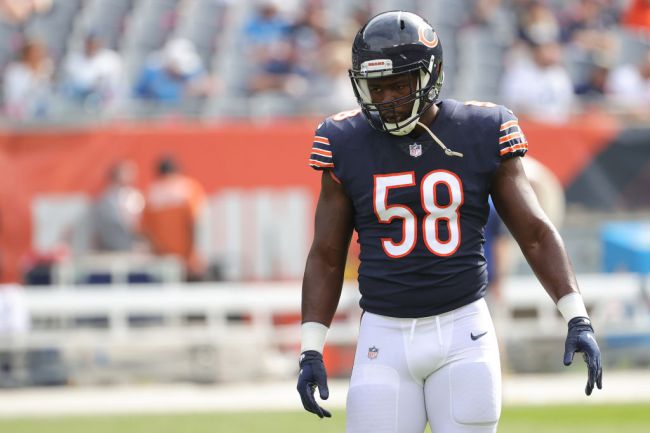 The NFL’s preseason begins this week for most of the league, but there is one team that suddenly needs to find a new home for one of their stars. Roquan Smith requested a trade from the Chicago Bears today.

The request comes after Smith had been holding out at Bears training camp, with the Bears putting him on the PUP list so he wouldn’t take a financial hit as he tried to get a new contract. It seems that gesture wasn’t enough and now the Bears will need to find a trade partner for Smith, which isn’t something that should be too hard to find.

According to NFL.com’s Eric Edholm, the Los Angeles Chargers, Atlanta Falcons, Baltimore Ravens, and Denver Broncos all stand out as options to land Smith.

3 of these teams would be adding an All-Pro talent to rosters that are expected to fight for playoff spots in 2022. The other team is the Atlanta Falcons. The Falcons adding talent at just about any position immediately makes them better as they have a ton of holes on their roster.

The Chargers have already made some big improvements on the defensive side of the ball, signing JC Jackson and trading for Smith’s former Bears teammate, Khalil Mack. Adding Smith would make a defense that should already be among the NFL’s best even more intimidating.

The Broncos are a similarly strong defense that would become even stronger with the addition of Smith and should be interested in acquiring Smith as they try to turn themselves into a Super Bowl contender with Russell Wilson.

The Ravens defense would also benefit from adding Smith, but he unfortunately wouldn’t be much help for their defense’s biggest weak spot. They struggled against the pass, allowing the league’s most passing yards, something Smith wouldn’t have much of an impact on.

Coming off of back-to-back All-Pro nominations, Smith is sure to attract plenty of attention around the league and will likely end up factoring into the playoff race by the end of the year.