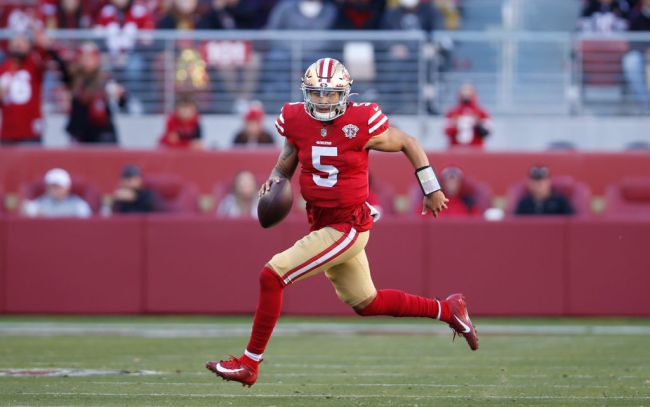 Throughout the NFL offseason, football fans have been expecting to see the San Francisco 49ers trade Jimmy Garoppolo. Once the team named Trey Lance as their starter it seemed like a certainty, but a move never came. It was assumed that an enticing offer never came in, especially after Garoppolo underwent shoulder surgery.

However, it turns out the 49ers might have another reason to hold on to Jimmy G right now. According to an NFL reporter, the 49ers have not been impressed by Trey Lance.

I have heard that the #49ers’ staff has been continually underwhelmed by Trey Lance … https://t.co/BfypDIHzXo

The 49ers probably weren’t the only people who have been underwhelmed by Lance. The football world got its first glimpse at Lance as an NFL starter last year and he was fine. He threw for 441 yards, 2 touchdowns, and 2 interceptions in those starts and led the 9ers to a 1-1 record. He also threw a pair of touchdowns in a game agains the Seahawks when he came off the bench.

Unfortunately, fine just isn’t going to be good enough for the 49ers. The 9ers already had fine. They drafted Trey Lance for his upside. If that upside still isn’t showing after a year of development, it’s a problem for the 49ers.

The 49ers find themselves in a unique position right now. Their team was decimated by injuries in 2020 and struggled through the season, putting them in position to trade up for Lance and start building for their future.

Then they completed turned things around in 2021 with Garoppolo at the helm. They made it to the NFC Championship Game, falling just short against the eventual Super Bowl winners. Now they know that they have a roster that is good enough to contend in the NFC, but they also have a young QB they just spent a ton of draft capital on.

It seems like the plan at this point is to let that young QB get his shot to show that he can take this team further than Jimmy G could, but keep Garoppolo as a backup plan. If the team struggles early and Lance experiences some growing pains, it wouldn’t be shocking to see them switch back to Garoppolo to keep themselves in contention.

The 49ers took a big swing on Lance based on a little more than 1 season of college film and a whole bunch of potential. At this point, it doesn’t sound like they’ve seen what they were hoping for.