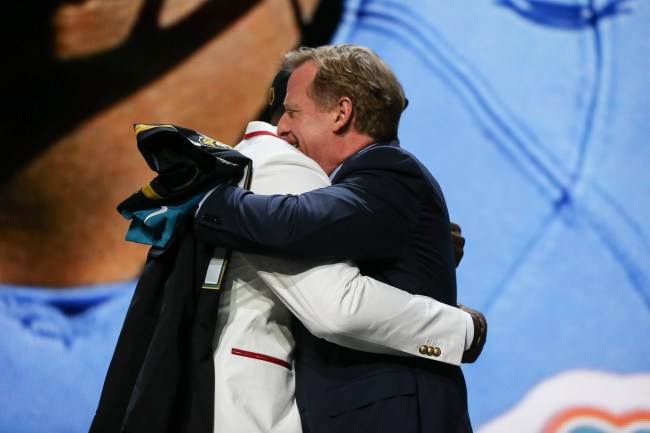 This year’s NFL draft, which will be held with players in attendance, is going to be a bit more normal than last year’s virtual draft

During a draft conference call on Friday, Ben Volin of the Boston Globe asked if NFL commissioner Roger Goodell would be able to give players bro hugs this year after calling their names on draft night. According to the NFL, Goodell is fully vaccinated and would be allowed to hug players at the draft.

No rule preventing the players on site from celebrating however they’d like with Roger Goodell or whomever. Goodell is vaccinated and it’s a brief moment.

NFL Commissioner Roger Goodell has been vaccinated and will be allowed to hug the players who attend Thursday night’s draft.

Of course, fans immediately had jokes about Goodell hugging players on draft night.

Roger Goodell with every pick on draft night pic.twitter.com/AK6MkZbeg5

THANK GOD I was worried Roger Goodell wouldn’t get to hug draft prospects like a mob boss before working the next decade to stab them in the back this year https://t.co/Wgkfd7OSFd

What if they don’t want to hug him

All the prospects when Goodell walks towards them pic.twitter.com/RvSQZmTRc1