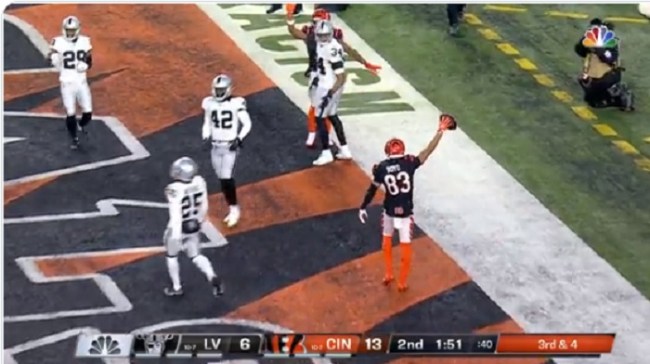 We have some controversy brewing in the Bengals-Raiders wildcard playoff game.

Late in the second quarter, Bengals QB Joe Burrow threw a TD pass while running towards the sideline. Before the Bengals TD catch, it appeared that a ref had blown a whistle while the ball was still in the air, which should have ruled the play dead on the spot.

I definitely heard a whistle. And I see LJ Mark Steinkerchner with his whistle in hand by his mouth. It certainly looks like an inadvertent whistle, which means there is no touchdown

NBC’s rules expert Terry McAulay confirmed that the refs made a mistake by not calling the play dead due to the whistle.

Terry McAulay confirms the Raiders got screwed on the erroneous whistle pic.twitter.com/P5MVhAWyaA

“What they should have done with the erroneous whistle is replay the down because it was a loose ball in flight, they can’t have a touchdown on that play by rule.”