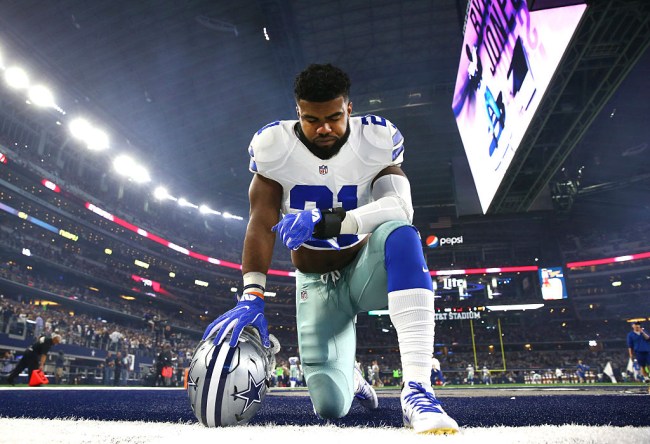 The battle between the NFL and its players’ union over Ezekiel Elliott’s domestic violence suspension is starting to get ugly.

In a statement issued Wednesday, the league ripped the NFLPA, and accused them of spreading “derogatory information” about Elliott’s accuser Tiffany Thompson just hours after text messages between Thompson and her friend discussing blackmailing were leaked to the media.

For the past week, Elliott’s team and the NFLPA have been on the aggressive trying to discredit Thompson by painting her as someone who has been falsely accusing the Cowboys running back of domestic violence in attempt to ruin his life.

Update: The NFLPA has responded the NFL with their own scathing comment calling the NFL hypocrites.

The NFL’s statement comes hours after Yahoo Sports! Charles Robinson leaked a portion of the NFL’s 160-page report on the Ezekiel Elliott domestic-violence case which details an exchange between Elliott’s accuser, Tiffany Thompson, and one of her friends in which they discuss using sex tapes of Thompson and Elliott as a means for blackmailing Elliott for money.

[Thompson]: What if I sold mine and Ezekiel’s sex videos

[Friend]: We’d all be millionaires

[Friend]: We could black mail him w that

[Thompson]: I want to bro

[Friend]: Id be like look give me 10k or I’ll just sell our sex videos for the same amount flat

[Friend]: Me and my friends tryna go on vacation and get boob jobs

(the report notes a pair of blank texts)

It looks like this case is going to get played out in the court of public opinion before it even gets to a courtroom.