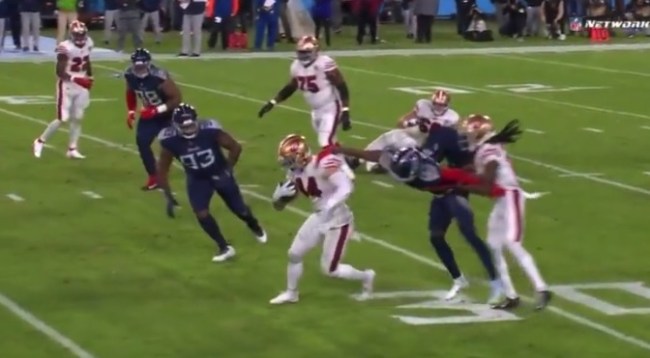 During Thursday night’s Titans-Niners game, Hochuli called a facemask penalty on Tennessee despite the fact that the Titans player obviously missed the facemask and held on to a shoulder pad while trying to make a tackle.

🗣 GET SHAWN HOCHULI OFF MY TV

he is legit terrible @nfl, how many times do we have to watch his horrible crew alter outcomes of games pic.twitter.com/I79UUQ6TV4

Hochuli was immediately blasted by fans over his egregious penalty call.

Shawn Hochuli’s crew is an embarrassment to the @NFL and @NFLOfficiating.

Shawn Hochuli at it again, gifting the 49ers a face mask that never happened.

If you've watched any amount of football this year, you're probably not surprised Shawn Hochuli can't tell a facemask apart from a shoulder pad

Shawn Hochuli is the worst referee in the NFL by a wide margin.

The @NFL and @NFLOfficiating really has to do something about Shawn Hochuli’s horrible officiating. He’s throwing games by making invisible and horrible calls.

Can’t believe the NFL would let Shawn Hochuli do another primetime game. https://t.co/gkiWK1VKp9