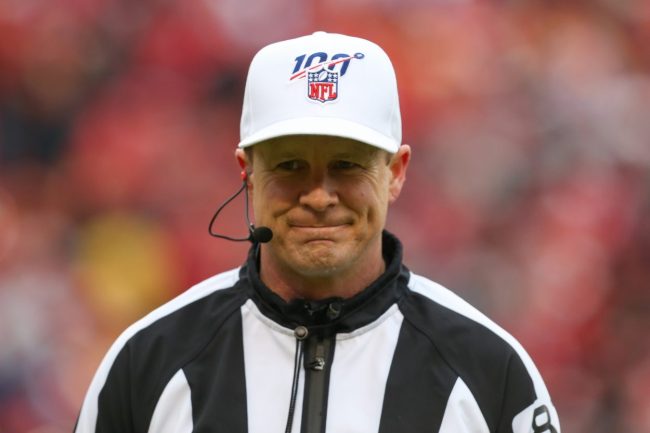 The second half of Sunday’s NFC Divisional Round game between Los Angeles and Tampa Bay was chaotic. Amidst all of the chaos, referee Shawn Hochuli quickly became the favorite referee amongst NFL fans who don’t root for Tampa Bay.

Not only did he give Tom Brady a penalty for swearing at him, but he had a fantastic explanation for a penalty in the fourth quarter.

On 4th-and-14, Tom Brady threw a deep ball to Mike Evans. Evans did not make the catch, but got rocked by Rams safety Eric Weddle.

Late hit by Eric Weddle but the Rams get the ball back…#RamsHouse #GoBucs pic.twitter.com/bbseMdUjkh

Weddle, who was actually retired for the entire 2021/22 season, came out of retirement for one last playoff run earlier this week. He made helmet-to-helmet contact with Evans and was penalized.

HOWEVER, because the ball had already hit the ground, it was not pass interference. Weddle’s hit was ruled a dead ball foul.

As a result, the play was a turnover on downs and Los Angeles got to keep the ball. The 15-yard-penalty was enforced on the Rams’ possession and they got the ball 15 yards deeper into their own territory.

Had the penalty been called any differently, it would have made a path to a Buccaneers comeback significantly easier. But it was not.

During the penalty explanation, which was quite lengthy, Hochuli delivered an all-time “however.”

Hochuli has been in the league since 2014 and was promoted to referee in 2018. He caught the attention of NFL fans online with his spicy explanation and quickly went viral.

People had all kinds of jokes and reactions, here are some of the best:

deep down inside every referee dreams of being able to go out there and hit us with the "WE HAVE AN UNUSUAL RULING" pic.twitter.com/YhhDKJI7gI

Genuinely love Shawn Hochuli’s long explanation there. Should be no confusion about what happened at such an important moment.

Shawn Hochuli hitting that “However…” pic.twitter.com/LGuGwKDDCZ

Shawn Hochuli getting ready to explain the foul: pic.twitter.com/JpkJbaqA1A

Hochuli to Brady after he dropped that "however" pic.twitter.com/OI6bmvVAgy

why is shawn hochuli so dramatic? bro you’re a referee

Hochuli very much enjoyed inserting that “however” into his ruling #RefShow

"…HOWEVER" from Hochuli has me cracking up