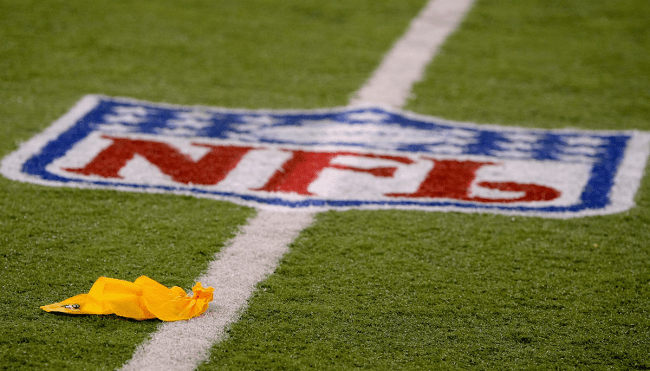 Over the past couple of decades, football has managed to oust baseball from the “America’s Pastime” throne thanks in no small part to the efforts of the NFL—which is especially impressive when you realize the lengths the league has gone to on its way to neutering some of the best aspects of the sport.

The NFL is known as the “No Fun League” for a wide variety of reasons, but there’s nothing that’s helped it earn that label quite like the approach it’s taken when it comes to targeting players who have the gall to come up with some creative ways to celebrate their achievements on the field.

A few years ago, The Washington Post took a look at the league’s vampiric ability to suck the fun out of the game and suggested the problem can be traced back to traditionalists operating in the shadows of its offices who instituted a rule banning “overly demonstrative acts by players” in 1984. That decision largely stemmed from their displeasure with the actions of a group of Washington wide receivers and tight ends dubbed the “Fun Bunch,” whose preferred celebration served as the inspiration for Hingle McCringleberry’s go-to thrusting.

It’s safe to assume those decision-makers would’ve crushed their pearls into dust based on how hard they would’ve clutched them if they’d been around for the Golden Age of NFL Celebrations we were treated to at the start of the new millennium. That charge was led by guys like Terrell Owens and Joe Horn, who channeled their inner Carrot Top by using a Sharpie and a cellphone as props following a touchdown, which eventually led to yet another rule being instituted prohibiting players from the “possession of foreign or extraneous objects that are not part of the uniform during the game or on the sideline.”

The fines that accompanied that new ruling only did so much to curb the trend, and Chad Ochocinco was more than happy to cough up the $50,000 his various antics cost him over the course of his career.

Sadly, the NFL didn’t have the foresight to ban miming, which could’ve prevented the truly disgusting act Randy Moss committed at Lambeau Field in 2005.

It was only a matter of time until choreographed group celebrations and any that involved a player falling to the ground fell victim to this trend. However, the tides started to turn a bit in 2016 after Roger Goodell instructed officials to crack down even harder before fans and players pushed back after refs started to throw a flag whenever it looked like someone was enjoying themselves a bit too much.

The following season, Goodell announced the NFL had decided to do something right for once by easing the aforementioned restrictions to once again allow its athletes to let their creative juices flow while basking in their own glory. It was an incredibly refreshing change of pace, but according to a recent report, the No Fun League has decided to do its thing once again ahead of the 2021 season.

On Thursday, NFL Competition Committee chairman Rich McKay revealed its intentions to turn its attention to a supposed increase in taunting, a decision that stemmed from a recommendation from coaches who think the gloating needs to get turned down a notch or two.

Not so much TD celebrations, but feeling of coaches' subcommittee is they've gotten lax on players going face to face, standing over people, pointing fingers, etc. Expect more flags.

I can’t necessarily fault the NFL for wanting to deter players from antagonizing their opponents and potentially prevent tensions from rising; its refs might make a pretty hefty salary, but they do not get paid enough to try to break up altercations involving dozens of freakishly muscular men attempting to defend their honor.

With that said, if history is any indication, this will be a classic “Better in theory than in practice problem,” as NFL refs have a tendency to err on the side of extreme caution when these crackdowns are instituted. There may not be an official mandate to throw a flag if a player makes eye contact for more than one second or hits an unacceptable decibel level following a sack, but it seems like there’s a good chance guys will find themselves penalized for acts like those nonetheless.

McKay also attempted to stress touchdown celebrations won’t fall casualty to this new push, but you also have to wonder who has the authority to determine where that line will be drawn. The NFL has found itself tumbling down this slippery slope on more than a few occasions, and it’s hard to believe it will magically find its footing this time around,

This is also a somewhat divisive topic, but I’m personally of the opinion that the NFL needs to exercise a bit more leniency when it comes to letting guys be dudes. Again, I understand the urge to diffuse situations early on to avoid the physical confrontations that can result if they escalate, but in doing so, it’s essentially overlegislating the psychological aspect of the game. It’s one thing to penalize a player for freaking out as the result of an opponent getting into his head, but to do the same to the person responsible for triggering them seems like a fairly misguided approach.

In the end, there’s no way of knowing how this will all play out until play kicks off, but I can’t say I’m too optimistic.