One NFL Team Hired A Private Investigator To Follow Odell Beckham Jr. Around When He Was Still On The Trading Block 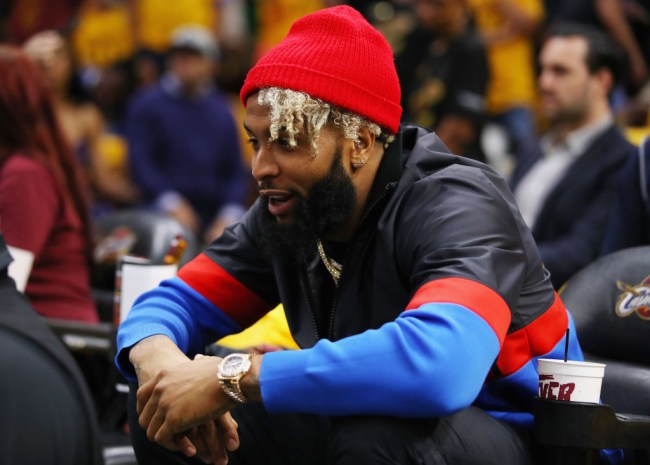 Yesterday, Odell Beckham Jr. became the highest paid wide receiver in the NFL–agreeing to a five-year extension with the G-Men worth $95 million, $65 mill of which is guaranteed (the highest guarantee ever for a WR).

The extension comes on the heels of the Giants dangling their three-time Pro Bowler out to other potential suitors. But while the 25-year-old’s ability on the field has never been in question, his behavior off it may have raised red flags. Several of them.

Five months back, a video surfaced of OBJ hanging out with a few girls and a white substance (you don’t need to be in the DEA to assume the white powder lined up was booger sugar). Two weeks after that, a man sued him for assault. And just weeks after that allegations surfaced of Odell paying a woman for sex.

I’m no NFL general manager, but if I was, I’d sure as hell make sure OBJ wasn’t a total loose cannon before handing him the bag. So it is no surprise that teams interested in Beckham Jr. did some serious investigation work.

According to an Odell profile by Seth Wickersham of ESPN, one team made sure they did their due diligence before committing to the unpredictable star.

The stakes are high. In the spring, when the Giants were listening to trade inquiries — the Rams and 49ers were the two teams reported to be interested, but there were others — one curious club hired a private investigator to track Beckham. The Paris video had introduced drug-use rumors that teams wanted to run down, even if recreational drug use falls below his surgically repaired ankle on most teams’ list of concerns. The PI’s report set off no alarms, but despite the Giants being “50-50” on their willingness to trade him, according to a league source with knowledge of the situation, no team would meet their asking price, which was believed to be a pair of first-rounders.

Would love to know what that private investigator saw. Time will tell if that information ever comes out.

The Giants believed OBJ was a safe enough investment to set him up nicely for the rest of his life. Who knows what version of Odell we’ll see for his second act in the NFL.