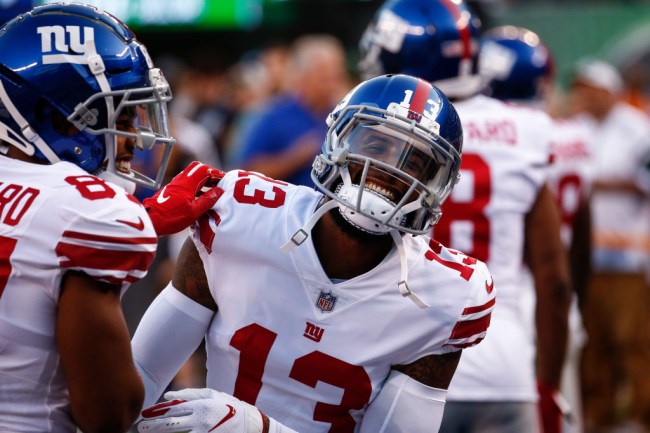 Odell Beckham Jr. just became the highest-paid wide receiver in the NFL after signing a five-year “mega-extension” with the New York Giants.

The #Giants and WR Odell Beckham Jr have agreed to terms on a 5-year extension worth a whopping $95M, source said. He gets the highest guarantee ever for a WR at $65M and averages $20M over the first 3 years. Nice job by the #NYG and agent Zeke Sandhu getting this done. Win/win.

If you think the Giants giving the bag to OBJ wasn’t a smart move, consider this: In the 47 career NFL games Beckham has played, no receiver over the past fifteen years has had more catches (313), receiving yards (4,424), and receiving TDs (38) over that same span.

If you Giants fans have any concerns about the massive contract causing jealousy within the locker room, this video should put your fears to rest.

You think the #NYG locker room is happy Odell got the bag? From Sterling Shepard's instagram story 3 minutes ago 😂😂😂 pic.twitter.com/iQRbv42SWo

congrats to my brudda couldn’t be more proud been solid since day one helped me a lot on my journey… you deserve it…MONEY MONEY MONEY!!!! @OBJ_3 pic.twitter.com/cncsmI7IfB

WR Hunter Sharp left the locker room party to tell me why Odell's teammates are so happy for his new contract: "I think he deserves it. He's been real humble about it. He's worked his ass off. Just to see him do that is motivation."

Here are some reactions to the contract on Twitter:

Most Total Guarantees for a Non-QB, All-Time

Odell Beckham Jr. , calling everyone to tell them about his new record breaking contract: pic.twitter.com/9UF0GYvG1n

Julio Jones looking at his deal after Odell’s extension comes in like…. pic.twitter.com/awCRzarYI7

Odell Beckham’s phone has been blowing up since signing his monster contract extension with the Giants: pic.twitter.com/zQ2Cb8R2Ed

One man isn’t so hyped on the deal:

Very happy the Giants overpaid for an Odell who can't always be trusted on or off the field, who hasn't been able to stay healthy and who has "led" them to one playoff game in his career – at Lambeau via South Beach.